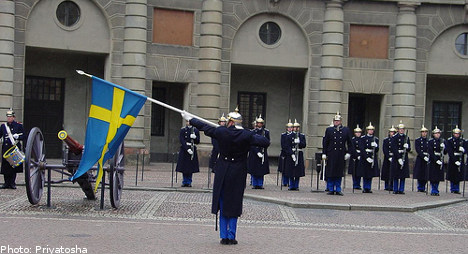 Changing of the guard at the Royal Palace in Stockholm

In a letter to the Armed Forces, the Royal Court explains that as the newly expanded team of guards will spend a large proportion of their duty time exposed to the elements they are in need of suitably rugged attire.

The Royal Court writes that the guards at the Haga park palace will need superior regimentals to those deployed to guard the Royal Palace in Stockholm explaining that uniforms have been ordered, but that they are not expected until August.

With an additional 12 staff due to join the surveillance team in mid-May, the Royal Court has now sought the aid of the armed forces to solve its palace pants shortage.

The Royal Court has asked for a total of 15 naval combat jackets and 12 pairs of naval combat trousers in order to ensure that the guards are wrapped up warm in time for the princess and Daniel Westling to move in after their June nuptials.

The Swedish government announced in April 2009 that Haga Palace was to be handed over for the use of Crown Princess Victoria.

The government had used the palace, which has also been known as the Queen’s Pavilion, since 1966, when the then king, Gustaf VI Adolf, surrendered the royal right of disposal.

Haga Palace was designed by the city architect Carl Christoffer Gjörwell and was completed in 1804. The current king, Carl XVI Gustaf, and his sisters were born in the palace and lived there until the death of their father in a plane crash in 1947.