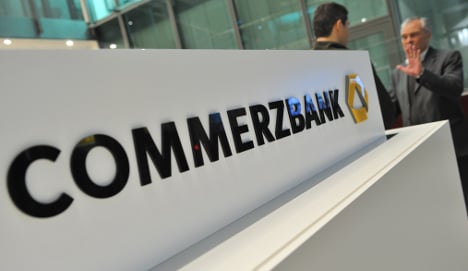 Germany’s second biggest bank said it held €3.1 billion ($4 billion) in Greek bonds and would not increase its exposure to Greek debt, which has been at the forefront of investor fears in recent days.

“I do not foresee any cost from our exposure to Greece in the second quarter,” Commerzbank finance firector Eric Strutz told a press conference. Commerzbank said its first quarter net profit stood at €708 million ($905 million), against a loss of €864 million for the same period last year, the company said.

It was the bank’s first quarterly net profit in 20 months and it exceeded a forecast by analyst polled by Dow Jones Newswires who had predicted a net profit of €435 million.

Operating profit reached €771 million in the first quarter compared to a loss of €595 million a year earlier.

After a meeting with top bankers on Tuesday, Finance Minister Wolfgang Schäuble said German banks are prepared to contribute to an EU-IMF rescue plan for heavily indebted Greece, without giving specific figures.

Under the agreement, the banks would subscribe to bonds being issued by the KfW state development bank to provide Germany’s €22.4-billion slice of the €110-billion bailout.

But Strutz said he was not sure yet how Commerzbank would contribute to the effort because “several options are on the table.”

Foreign banks are exposed to $236.2 billion of public and private debt in Greece, the Bank for International Settlements said last week. French banks were the most exposed with holdings of $75.2 billion, followed by German banks ($45 billion) US ($16.6 billion), British ($15 billion) and Dutch banks ($11.9 billion), BIS said.