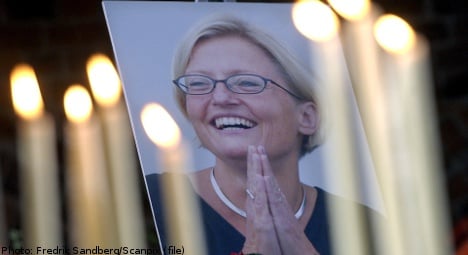 Kristina Alvendal, the vice-mayor of Stockholm, was on hand to official open Anna Lindh square located near the rebuilt Skrapan tower at the junction of Götgatan and Vartoftagatan in the Södermalm district of central Stockholm.

“I am happy to be able to have contributed to the creation of a square for Anna Lindh. She was a colourful politician who worked in local, national and international politics,” said Kristina Alvendal.

“As she lived for several years on Södermalm and is buried in the Katarina church cemetery it feels natural that a square on Södermalm bears her name,” Alvendal said.

Anna Lindh died on the morning of September 11th 2003 at Karolinska Hospital after sustaining stab wounds in an attack by Mijailo Mijailović in the NK department store shortly after 4pm the day before.

On the first anniversary of the attack a statue was unveiled on Medborgaplatsen to mark the spot where Anna Lindh held her final speech during campaigning for the 2004 referendum on the Euro.