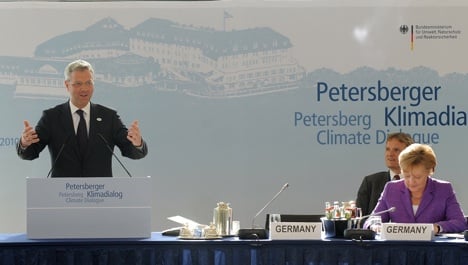 “The ice is broken,” Röttgen told journalists as the two-and-a-half day brainstorming session outside Bonn ended. “This meeting was a very important contribution to building trust and confidence.”

Side-stepping some of the major political land mines that derailed talks in the Danish capital, ministers and negotiators from 45 countries zeroed in on what will become the building blocks of any future global climate deal.

These include mechanisms for the measuring, reporting and verification of pledges to cut greenhouse gases, the disbursement of short-term financing to poor countries bracing for the climate change impacts, and figuring out the most effective way to halt deforestation.

“We have reached consensus on forest protection, and there are good perspectives for consensus on technology transfer – a result is possible, at least in Cancun,” Röttgen said, referring to a UN climate conference late November in the Mexican resort town.

Röttgen also unveiled an initiative from Germany and South Africa to create a kind of exchange platform between rich and developing countries for sustainable development initiatives.

After the huge disappointment of Copenhagen, ministers here trod a fine line between aiming too high or too low for Cancun and beyond. Asked whether a full treaty was possible in Mexico, Europe’s Commissioner for Climate Action Connie Hedegaard replied: “Not probable.”

“It is extremely important that we have a set of concrete decisions coming out of Cancun. But we need to look at the process realistically,” she told journalists.

A highly polarised debate on what kind of legally binding treaty might emerge from the troubled UN talks has given way instead to the “building blocks” approach.

“Copenhagen was a reality check,” said Jose Romero, Switzerland’s top climate negotiator and a veteran of UN climate talks. “We are going to focus on substance, we want consensus on the substantive measures before talking about the agreement itself,” he told news agency AFP.

UN climate chief Yvo De Boer said a “good outcome” in Cancun would be “an operational architecture on climate change.”

But positive thinking and incremental progress will only go so far in bridging major disagreements among nations on how to divvy up the task of slashing greenhouse gases and who will pay for it, the necessary core of any climate deal.

Voluntary emissions pledges currently registered in the Copenhagen Accord put Earth on track for temperature increases of 3.5 to 4.0 degree Celsius (6.3 to 7.2 degrees Fahrenheit), far above the 2.0 C threshold for dangerous warming.

The so-called Petersberg Climate Dialogue – named for site of the talks, near Bonn – was also haunted by stalled legislation in the United States, said Martin Kaiser, climate policy director for Greenpeace International.

“The US pledges in the Copenhagen Accord on emissions reductions depend on national legislation, which is stalled,” he said. “So basically that means they have not pledged anything yet – that is the biggest problem we have.”

Developing countries have also expressed skepticism and impatience on promises for financing.

The accord earmarks $30 billion in “fast track” money before the end of 2012, to be scaled up to $100 billion per year by 2020. But delays in releasing the emergency funds and concerns about where the long-term financing will come from have cast a long shadow over these

“It is widely recognised that finance is the key to opening the next door,” said Switzerland’s Romero.