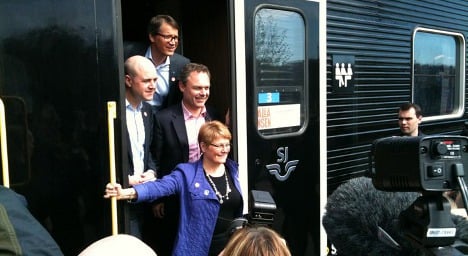 The ministers, who also include Finance Minister Anders Borg and the leaders of the three smaller governing parties, are taking a train to Gothenburg to clarify the government’s platform after the Red-Green opposition announced its economic policies on Monday.

“Let’s get the election campaign started,” he said. “Now there are two clear options: one for jobs and enterprise and one which wishes to increase subsidies. We will stop in several cities along the way and tell people about our vision for our platform.”

A cabinet meeting was held on board the train during the trip. Björklund believes that it will be easier to reverse the government’s gloomy opinion figures now that the Red-Greens have laid their cards on the table.

The four party leaders, Reinfeldt, Björklund, Maud Olofsson of the Centre Party and Göran Hägglund of the Christian Democrats, first went to Norrköping to take the city’s famous tram and held a public hearing. The party leaders also participated in a joint appearance in Borås in the afternoon before arriving in Gothenburg. Some of the ministers on board were already in Södertälje, while others got off along the way.

At Stockholm’s Central Station, party leaders met with demonstrators who protested that too little is being done to reduce youth unemployment. Employment Minister Sven Otto Littorin took the opportunity to criticize the opposition for proposing the reversal of a reduction in payroll taxes for young people.

Olofsson called the Red-Green proposal a “penalty tax” on the young.

“It dramatically reduces the opportunities young people have to find jobs,” said Olofsson.

At a press conference on board the train, the Alliance government presented its own report on its efforts to fulfill election promises from 2006. According to the government, it has implemented 103 of its 131 manifesto promises. Another 23 are being implemented, while five have not yet been met.

Among the five are abolishing compulsory military service, reducing the maximum rate for luxury taxes and transferring the tax cost of road traffic injuries to motor vehicle insurance.

Olofsson gave herself and the government high marks.

“We have carried out what we promised, we have accomplished what we wanted to achieve, but there is more to do,” she said, referring to the conservative alliance’s upcoming election manifesto in mid-August, when its new proposals will be presented.

In order to show the differences between them and the Red-Green opposition, the four party leaders also singled out nine campaign promises of what they would not do. For example, they will not introduce a kilometre tax on heavy traffic nor a quota on parental leave, as well as make it more expensive to hire young people, they said.