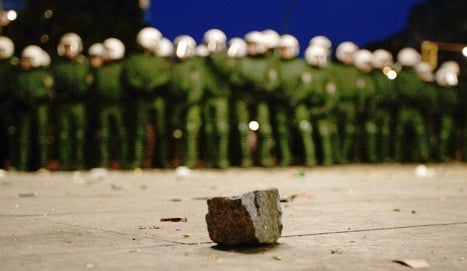 The violence associated with the May 1st demonstrations in Kreuzberg first began in late eighties, as a reaction against a police raid in the West Berlin leftist scene. But in the last several years, the violence has become more and more ritualised, with violent anti-capitalist leftists and others coming from across Europe for what has been called “riot tourism.”

This year, the controversial artist group Public Movement, sponsored by Berlin’s Hebbel-Am-Ufer theatre, will be marking May 1st with an event centred on the violence. Described as a “Mass Performance With Live Audio Transmissions,” the event involves loaning out free mobile headsets offering five radio channels of commentary and music ”created especially for the riots.”

This is the second phase of something called ”Performing Politics for Germany.” What does this mean?

DY: In the last two years, we’ve been coming to Germany, doing research, and performing actions. We were researching (the neo-Nazi party) the NPD, the Antifa (anarcho-leftists), and the riot police, trying to understand these organisations, their techniques.

OK: Basically, we were researching what we call public choreographies. All of these are groups are, in different ways, rehearsing, and through that, performing political systems. It’s symbolic and ideological, but it’s also personal, to do with social issues, issues like belonging, alienation, and identity. In other words, whenever there’s society, there’s performance.

What are you doing on the 1st May?

DY: We’re inviting the public to observe again a ritual, which takes place every year in a new way. So, practically what we’re doing is supplying five different audio tracks, which have been created for this event. One is live commentary made by two sociologists – Thomas Schaeffer and Robert Schmidt, who are walking in the demonstration and discussing it, another is a live musical soundtrack by a musician from called Nackt, who’s the leader of Warren Suicide, a third is a prerecorded talk by the philosopher Joseph Vogel, a fourth is archive material from the history of May 1st…

OK: And the fifth is a DJ, basically playing dance music.

What you trying to do with this event?

OK: We want to question it. We want to highlight it as a phenomenon in which thousands of people who enjoy civil liberties, and an affluent economy, are going out in the streets to protest every year, some of them violently. In a way it expresses a very basic resentment, a dissatisfaction with the current state of affairs, which might not be well-grounded, but is still real.

DY: It’s significant that the demonstrations on the first of May aren’t really organised around a specific issue. It’s a demonstration in the cause of demonstration, of getting together, and performing identities. I think that people want – through this event – to change themselves.

Isn’t this is just an elevated example of riot tourism? Aren’t you just glorifying violence?

DY: I would say the opposite. The riot tourism, and the violence, is happening every year. What we’re offering is chance to try and rethink the riots, from inside them. We want to approach the violence that exists there, and understand it, and through that, give the public the chance to experience this event again. In a way, we want to take them one step out…. and then bring them back them in. We want to bring back the beauty of protest, and we want people to experience this event intelligently.

Headsets for the “First of May Riots” will be available from the Paloma Bar in Kottbusser Tor, Berlin from 7 pm, on May 1. Participation is free, but a deposit is necessary. Reservation is recommended. Further information available on 030-259004 27 or www.hebbel-am-ufer.de.