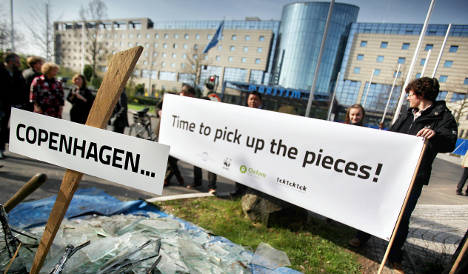 It will be the highest-level political meeting on climate since the much-criticised December conference fell spectacularly short of delivering the binding treaty that nearly all nations say is needed to spare the planet from the worst ravages of global warming.

German Chancellor Angela Merkel and Mexican President Felipe Calderon, host to the next UN conference in Cancun at year’s end, will kick things off late Sunday, setting the tone for the two-and-a-half-day closed-door brainstorming session.

“It is the return of the ministers, who are there to give political guidance to (technical) negotiators,” said Brice Lalonde, France’s climate ambassador. “What counts at this point is political initiative.”

One avowed aim of the Petersberg Climate Dialogue – named for the castle where it is to be held – is confidence building.

Climate talks so far have been “hampered by lack of trust and leadership,” German Environment Minister Norbert Röttgen said bluntly in the letter of invitation.

The upcoming deliberations, he added, should “contribute to the necessary inspiration and political direction for upcoming negotiations.”

Just how hard that may be was laid bare in Bonn only weeks ago at the first meeting since Copenhagen of the 194-nation UN Framework Convention on Climate Change (UNFCCC), the main vehicle for global talks.

The only thing that the negotiators seemed to agree on was that the session was tense and riven by mistrust.

“If we see another failure in Cancun, that will cause a serious loss of confidence in the ability of this process to deliver,” the UNFCCC’s outgoing Executive Secretary, Yvo de Boer, warned at the time.

The Petersberg talks appear designed to sidestep some of the biggest political landmines that derailed Copenhagen, focusing instead on narrower issues where at least some progress has been made such as technology cooperation, verification regimes and fighting deforestation.

“But the question is, can you get incremental progress on some of these ‘building block’ issues without a full-blown deal on a new treaty,” said Alden Meyer, a climate policy analyst at the Washington-based Union for Concerned Scientists.

One of the potential deal-breakers in the long run is a disagreement between the United States and China – the world’s two major carbon polluters – on how to divvy out the job of slashing CO2 emissions, and whether both countries should face the same legal constraints.

“Washington says that any legal instrument it takes part in must have the same degree of ‘bindingness’ for China as it has for the US, which China clearly rejects,” Meyer said.

Developing countries argue they are not historically responsible for climate change, and thus should be allowed to take purely voluntary steps to help fix it.

Japan and Russia, meanwhile, have become more vocal in saying they will not re-commit to cutting greenhouse gases under the Kyoto Protocol unless both the

United States and the developing giants such as China and India accept some kind of commitments too.

The United States was the only advanced economy to reject Kyoto, whose obligations expire at the end of 2012, calling it unfair because it made no demands of major emerging economies. The fate of the Protocol – fiercely defended by developing countries – is as contentious as it is unclear.

One way to avoid failure at Cancun may be simply to lower expectations.

Indeed, all the major players seem to have given up on the goal of a legally binding treaty by year’s end that would spell out the path for reducing emissions enough to keep global temperatures from rising more than 2.0 degrees Celsius (3.6 degrees Fahrenheit), the target embraced by the 11th-hour Copenhagen Accord.

Voluntary pledges currently registered in the Accord put Earth on track for a 3.5 C or even a 4.0 C world by 2100, far above the threshold for dangerous warming, said Alden.

A binding outcome this year is “unfortunately” unlikely, Europe’s Commissioner for Climate Action Connie Hedegaard said earlier this month, while US chief negotiator Todd Stern last week cautioned that expectations for Cancun must be “realistic.”

And on Sunday, the so-called BASIC group of developing economies – China, India, Brazil and South Africa – said in a joint statement that a legally binding deal should be concluded at the December 2011 UN climate meeting in South Africa “at the latest.”