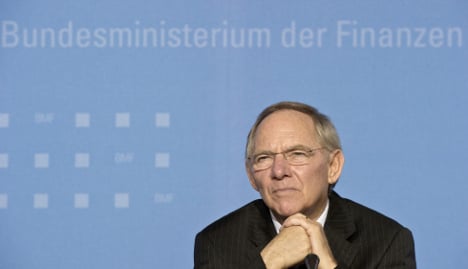 Schäuble has planned telephone conferences with bosses from the main German banks, probably on Sunday, once a deal has been negotiated by Greek officials, the International Monetary Fund and European Union representatives, daily Handelsblatt reported.

The business newspaper quoted sources close to the government as saying that Schäuble wants to extract “a voluntary commitment” from the banks to buy Greek debt as a “stabilisation measure” aimed at volatile financial markets.

Such a move would also help soothe German public opinion, which is currently opposed to helping Athens out of its fiscal jam.

Greece has asked the EU and IMF to activate a three-year rescue package worth €45 billion this year alone as it faces a May 19 deadline to repay €9 billion in maturing debts.

The cost of the bailout plan over three years could reach €120 billion.

A new poll by the Dimap institute cited Friday by the German news television channel NTV found that 53 percent of Germans would now accept a Greek rescue if the banks took part.

Several political leaders have blamed the banks for helping stoke the Greek crisis while Berlin has been reluctant to approve a rescue plan ahead of a key state vote in North-Rhine Westphalia on May 9.