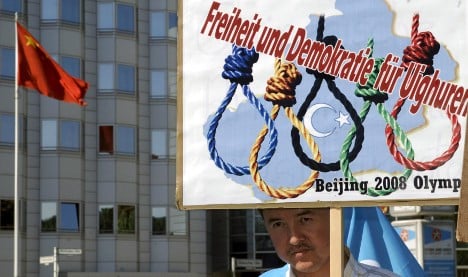 The demand for Germany to act against the World Uighur Congress was made during Bavarian Premier Horst Seehofer’s visit to Beijing for political talks with Chinese leaders.

“There is no reason to think that organisations active in Germany, in particular the World Uighur Congress, are pursuing extremist and therefore terrorist aims, or are supporting violent efforts in China,” the state’s Interior Ministry said in a statement to daily Passauer Neue Presse on Thursday.

There was no evidence that the sometimes violent separatist efforts of the Uighur minority in China were being supported by members of the ethnic group in Germany, the statement said.

“The Uighur, on the whole, maintain a low profile in Bavaria,” it said.

The rebuff is part of a long-running battle with the Chinese government. In November last year, Munich investigators searched the apartments of four alleged Chinese agents on suspicion they were spying on the city’s Uighur community.

China also pressured Germany not to accept a US request to take up to nine terrorism suspects of Uighur background from the US prison camp at Guantanamo Bay.

As it happens, Bavarian Interior Minister Joachim Herrmann has firmly ruled out accepting the suspects.

Most of the world’s Uighurs living in the Xinjiang Uyghur Autonomous Region of China. Separatist groups among the Muslim minority have frequently clashed with the central Beijing government. In July 2009, an uprising by Uighurs led to 197 deaths.