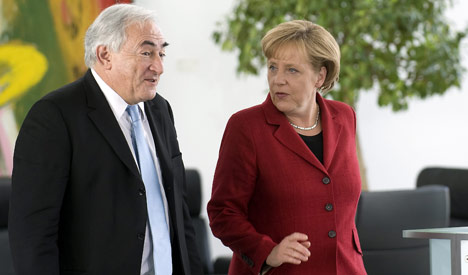 “It is perfectly clear that the negotiations with the Greek government, the European Commission and the IMF need to be accelerated,” she told reporters after talks with visiting IMF chief Dominique Strauss-Kahn.

“We hope they can be wrapped up in the coming days and on the basis of this, Germany will make its decisions.”

Merkel reiterated that Germany expected Greece to implement an “ambitious” austerity programme if it wanted a helping hand.

Strauss-Kahn, who had earlier said that confidence in the 16-nation eurozone as a whole was at stake with the Greek debt crisis, tried to talk up Athens’ reliability as a borrower.

“It is not granting money, it is loans that will be repaid, and they will be repaid when Greece will be back on track. That is why this programme has to be credible,” he said.

Strauss-Kahn also attempted to calm markets, which have been deeply shaken by the Greek turmoil.

“There is no programme from the IMF that has not been repaid in the past.”

But it was clear pressure was mounting on Berlin to act.

European Central Bank President Jean-Claude Trichet warned time was fast running out and Germany must quickly decide whether to contribute its share.

“There is an absolute necessity to decide very rapidly,” he said after meeting German Finance Minister Wolfgang Schäuble, Strauss-Kahn and top German lawmakers.

With opinion polls showing strong opposition within Germany to handing over cash to the Greeks, Merkel has said Berlin will only contribute when Greece comes up with a firm plan to bring its finances in order.

Merkel, who is being asked to contribute some €8.4 billion, faces a key state election on May 9 and analysts say she is wary of having her hand forced ahead of the vote in North Rhine-Westphalia.

In comments likely to fuel sentiment against a bailout, the head of one of Germany’s top economic institutes warned Athens would not pay Berlin back. And two parliamentarians who met with Strauss-Kahn and Trichet said the size of the bailout package could be as high as €120 billion over three years.