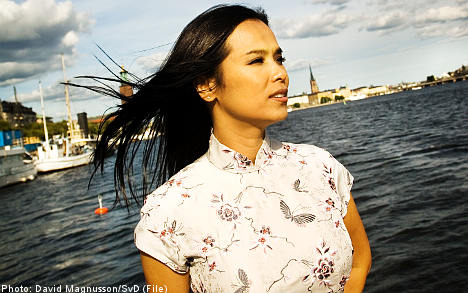 The Local reported last June on claims from the Swedish Tax Agency (Skatteverket) that Wei Wei had neglected to pay income taxes on money earned from concert tours throughout her homeland, where she is one of the country’s biggest stars.

The agency estimated that Wei Wei earned around 29 million kronor ($4 million) per year while resident in Sweden between 2004 and 2008 – income which was never reported to Swedish tax authorities. The agency in June 2009 submitted a request to the County Administrative Court’s (Länsrätten) in Stockholm to freeze some 50 million kronor of the singer’s assets.

But in her letter to Fredrik Reinfeldt, Wei Wei argues that the court’s subsequent rejection of the Tax Agency’s request has not been observed and expresses dismay over what she argues is a lack of respect for the Swedish legal system.

“I learned to love the country bit by bit, but now I feel being abused by the bureaucracy. Simply, because the tax authority does not seem to consider the legal process,” Wei Wei writes.

While the court agreed that it was “probable” that Wei Wei had indeed earned money that ought to be taxed in Sweden, it ultimately ruled that the tax agency had failed to provide “enough concrete evidence” to back their claims about Wei Wei’s earnings.

The court claimed that the agency’s estimates were based on “information from the internet and the media, including interviews with Wei Wei as well as conversations the Tax Agency had with people who are long-time residents of China”.

Despite the court decision, Wei Wei claims that the tax agency has moved ahead with freezing her assets, to a value of 80 million kronor according to an order she claims has been filed with the Swedish Enforcement Authority (Kronofogden).

Wei Wei claims that the authority has seized 600,000 kronor from her account in Handelsbanken without prior notice.

“My lawyers are shocked, my Swedish neighbors, partners and colleagues are

feeling bad and insulted on behalf of me,” Wei Wei writes.

Wei Wei was married in 1995 to American pianist Michael J Smith, a Swedish resident since 1974, until the couple divorced in 2003. In her letter to the prime minister, Wei Wei declares that she “lived mostly in China and partly in Sweden from 1999-2007” together with her three sons.

She claims that she has paid taxes for the period in question, in China, and argues that a double taxation prevention agreement between the two countries means she has met her obligations.

While living in Stockholm, the singer worked with the likes of Benny Andersson and recorded her song I Want to Fly (the Mandarin version of Where We Are), official song for the 2008 Olympic Sailing City of Qingdao, in the city.