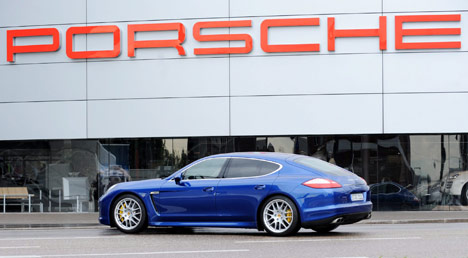 A spokesman for Stuttgart-based Porsche said the “precautionary” recall of 11,324 Panameras was because the seatbelt could come undone when the front seats are slid right forward into what it called an “extreme position.”

“It is possible that the function of the locking mechanism of the seat belt mount can no longer be guaranteed,” a safety notice said. “In the event of a crash, the seat belt may not provide adequate protection for the seat occupant, which may increase the risk of injury or death.”

“There have not been any accidents,” the spokesman told AFP. “The operation has been running since the beginning of March… and hope to have it completed this spring.”

The car hit showrooms last year in Porsche’s latest move away from just making two-door sports cars like the 911 or Boxster, a process begun a few years earlier with the hugely successful Cayenne sports utility vehicle.

Porsche was also banking on 20,000 Panamera being snapped up by customers a year, putting it back on the road to recovery after the global recession made it and fellow German luxury automakers BMW and Daimler hit the skids.

It was also hoping that the elongated new star would restore some wounded pride after its audacious attempt under former boss chief Wendelin Wiedeking to take over the much larger Volkswagen went so spectacularly wrong. The bid went sour after the financial crisis dried up credit markets, ;eaving Porsche under a mountain of debt and with Volkswagen turning the

Volkswagen in December acquired a 49.9-percent stake in Porsche’s sports car operations for €3.9 billion as part of a complex merger expected to be finalised in 2011.

Tuesday’s recall came hot on the heels of a series of embarrassing recalls that has shattered the reputation of Japan’s Toyota, the world number one automaker. The Japanese giant had to recall around 10 million vehicles worldwide, mostly for problems with sudden acceleration which have been blamed for 58 deaths in the United States.

Toyota is facing at least 97 US lawsuits seeking damages for injury or death linked to sudden acceleration and 138 class action lawsuits from American customers suing to recoup losses in the resale value of Toyota vehicles.

Shares in Porsche, which said the financial hit from the recall would be minimal, fell almost three percent in Frankfurt on Tuesday. VW fell more than three percent.