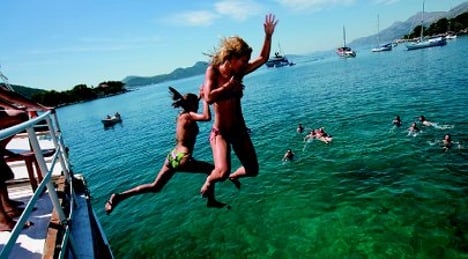 We know it can be a bit daunting booking your holiday, particularly if you’re doing it on your own. But you needn’t worry – a huge majority of Contiki travelers go solo. It’s a great way to meet new people and you’ll have new friends’ couches to crash on all over the world after the tour. If you are worried that you are too young or too old – then you needn’t be. Each tour will have a pretty broad range of people, with the average age being around 22-25. Contiki is all about attitude and not how many birthdays you’ve had.

OK, so let’s start packing. You don’t need to race out and buy a backpack specifically for a Contiki tour. If you already have one or you are planning on doing some solo travel as well, then great. Otherwise, the bus will deliver you door-to-door between destinations so you can survive with a suitcase. It is worthwhile taking a sleeping bag. You probably won’t need it in France or Italy in the summer but you’ll want it in the Swiss Alps. It doesn’t need to fit in your luggage so you can just tie it to your pack/case.

Now, what do you need to put in your luggage? Well clothes are a start. Remember, it’s not a fashion parade. Do not expect your clothes to return in the same state they started out in, so probably best to leave the Prada at home. But jeans won’t cut it with the high rollers at the casino in Monte Carlo,. so be sure to pack a couple of flash outfits. In terms of getting laundry done, there are washing machines at most of the campsites. Just remember to take some laundry tablets.

Here’s a tip for young players….the humble towel. If you like a shower in the morning before getting on the bus (and who doesn’t want to wash away the cob webs after a big night), then you will be faced with a quandary. How are you meant to pack a soaking wet towel and not have it infect the rest of your luggage and also be of use that night? Here’s a tip, try taking two smaller, thinner towels. On the morning you are travelling, store your wakeup-shower towel in a plastic bag or isolated pocket of your luggage and dry it out once you get to your next stop. You can then use the second towel for a shower that night. Genius.

Electricity. You almost certainly have stuff that needs it. Contiki coaches are equipped with power outlets so you can charge on the go. Also consider a double adapter if you want to do the camera and iPod at the same time.

Get cashed up: Before you go, grab local money for the major countries you will be spending time in. eg British pounds and Euros. Then, make sure your ATM card will work across Europe (e.g. Cirrus compatible).

Cruising on the Coach

Contiki Coaches are just as much part of the experience as the destinations themselves, and if you plan on spending your coach time catching up on the sleep that you didn’t have the night before, here are a few tips. A small pillow can be a decent idea , since neither the window nor the shoulder of the person next to you is particularly comfortable (particularly if you’re prone to drooling).

Contiki coaches are fun and music will often be playing through the speakers. If you fancy yourself a bit of a DJ, then program a playlist on your ipod and get your tour manager to give it a spin. Be warned Bryan Adams may or may not get a hostile reaction.

Take photos – lots of them. When you think you’ve got enough, then take some more – you’ll appreciate them later. If you’re in the digital age (as you well should be) then take plenty of memory with you. A few gigs should do it. If you’re still using film, then you’re a weirdo…Also, having 2-3 spare camera batteries is invaluable. Having your camera go flat while you’re on the top of the Eiffel Tower is not cool.

A couple of tips for your photos:

– Take photos of signs. This way you know where you were.

– Take more than one photo of important things. The viewfinder on your camera can be deceptive. What looks like a great shot can actually turn out to be just slightly out of focus. Take a few shots just to be sure.

– Get some photos of yourself. It’s nice to prove you were actually there. And it keeps your parents happy, and you’ll have enough fFacebook profile pictures to last you a decade.

Contiki makes arriving in a new city really easy for you, dropping you right where the action is along with a map highlighting all the big sights. Your skilled Tour Manager will also take you on a walking tour of the city’s most famous attractions, and a show you a few local secrets as well. After that it’s free rein, and you have a new city as your playground, to explore and embrace.

If you want the ultimate experience then why not jump in on some of Contiki’s optional adventures. These can be as thrilling as a skydive, or as tranquil as a Gondola ride in Venice. Don’t forget about “Only With Contikis”. These are exclusive activities that are included in your tour cost and special experiences that only Contiki can provide.

No need to enroll in French classes. Your Tour Manager will give you a run-down of how to say some of the basics (e.g. hello, please & thank you) in each of the countries you visit. Why not give your tongue a work out and try you’re new language skills on the locals. They will take you a long way.

So, you’re on a bus with 40 people you don’t know. Chances are you’re going to get on better with some of them than others, that’s just how it goes. The bus will divide up into a bunch of social circles. Don’t be too quick to only hang out with the same 5 people though. Be a social butterfly and get to know everyone. It can take a while for some people to come out of their shell and the people you spend most of your time with on the first couple of days may be very different from the people you end up hanging out with by the end of the tour.

Picture this, you’re at the bar after a long day of seeing the sights and there’s a cute girl/guy on your tour with a really attractive accent. You have a few drinks and a few laughs and one thing leads to another. Woohoo for you, right? Well possibly not. If something happens in the heat of the moment and don’t really intend spending the remainder of the tour with the person in question, then this can result in a couple of really awkward days being trapped on a bus with them. Don’t get me wrong, if you only have eyes for him/her and vice versa, then rock on! Contiki has spawned more than a few couples over the years. Just be aware that the inter-bus hookup is an adventure that could be fraught with danger.

You’ll have plenty of chances to party. Almost all of the Contiki campsites have a bar and some of them are among the best party spots on earth. You also get plenty of nights out on the town to mix it with the locals throughout the continent and try out those language skills your Tour Manager taught you… Drinks can be a bit expensive in some places, though. It’s often not a bad idea to pick up a bottle or two in town before heading back to camp for a few pre-drinks before the nights activities.

It’s important to note, the partying thing is not enforced. If you’ve had a big day, and all you want to do it get some shuteye, then that’s totally up to you. Generally some nights are bigger than others. If you are staying in a city for more than one night, then the night of arrival is generally the best night to get amongst it since you don’t have to get up and on the bus the next morning.

Don’t forget about your poor Mum, family and friends missing out on all that Contiki fun! Make sure you grab a few souvenirs and bring a bit of that European magic home with you to share with loved ones.

Well that’s about it. You’ll have a blast, trust me. Just remember to be open to new things and enjoy every single minute of it. Some of the best memories of your life are waiting for you and all it takes is a couple of clicks of the mouse when you book online at contiki.com.