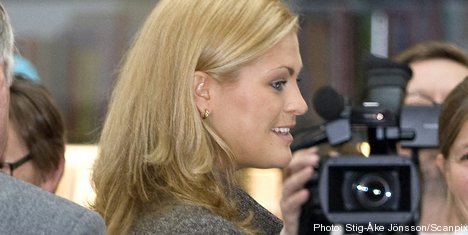 For European royalty, media intrusion has long been a fact of life. The Swedish media, however, has generally kept a respectful distance – even the tabloid newspapers have steered away from the more lurid gossip.

But the events of the past few weeks have led to questions about whether Sweden is following the pattern set in Britain and continental Europe, with speculation about Princess Madeleine’s relationship with her former fiancé Jonas Bergström covered by many of Sweden’s media outlets.

The media frenzy cumulated on Saturday when the Royal Court announced that the couple were going their separate ways. Only time will tell whether the tabloid interest in the relationship represents a permanent change of approach, but the Royal Court will certainly be hoping that the focus shifts back to the Royal Family’s work and the impending wedding of Crown Princess Victoria and Daniel Westling.

The relationship between the Royal Family and the Swedish press, though at times strained, has almost always been an open one and characterized by mutual respect. The members of the Royal Family understand that there is an interest in them and their lives. Though they passionately believe that their private lives should be kept personal, they do want and need media coverage of their work and official duties. However several media outlets often overlook many of the Royal Family’s official undertakings and instead cover the more glamorous happenings.

Unlike many other European monarchs, such as King Juan Carlos of Spain and Britain’s Queen Elizabeth II, Sweden’s King and Queen frequently give interviews. There is a genuine openness when the Swedish royals are interviewed about their work and charitable interests. Numerous interviews are given to newspapers, television and radio during the year.

Before state visits abroad media from the country being visited are almost always invited to meet the King and Queen to talk about the upcoming visit. And when the King and Queen are on state, and other official, visits they always take time out from their hectic schedule to meet with the Swedish press covering the occasion. Most recently almost the entire family participated in a television documentary focusing on the Bernadotte dynasty being aired this week on Swedish TV4.

When Crown Princess Victoria, Prince Carl Philip and Princess Madeleine were children there was an unofficial agreement between the Royal Family and the press. The children’s parents, and the Royal Court, were very aware that there was great interest in the younger members of the family. At the same time, the King and Queen wanted their children to have a proper childhood, out of the limelight and without constant media exposure.

To ensure this the Royal Court arranged photo-ops and press meetings for journalists a few times a year, thus also ensuring the children could have time away from the curious cameras. The press covered these events closely, but otherwise left the youngsters in peace to go to school and meet with friends. The agreement came to an end though when they became adults and coverage has intensified over the years.

That has of course changed and more and more frequently shots are taken of the family going about their lives, while out for an intimate meal at a restaurant or even parking their car. The emergence of the paparazzi in Sweden can be traced back to one snap taken a few years ago: during a birthday party in a Stockholm suburb, photographers sat in a boat outside a restaurant photographing the gathered guests. Among those invited was Crown Princess Victoria. Her date that night was Daniel Westling. The photographer in hiding managed to get the shot everyone was waiting for – the couple kissing. Today photographers hiding and waiting to take pictures of the Royal Family is much more common.

One can only speculate as to whether the Royal Family’s relationship with the press will change after the past few weeks of sensationalism seen in much of the press. Media coverage of the family has shifted to a level not seen before in Sweden. Previously there was a fine line on what was reported on and what was not. The line has been crossed and it is not always easy to return.

The unspoken agreement amongst most journalists has not only been restricted to the Royal Family, but also to a lot of other public figures in Sweden. Perhaps this shift in reporting will affect them as well. However the Royal Family, as well as the Royal Court, is very professional when it comes to dealing with the media. There is no doubt that they will still continue to share their work and interests with the press, but perhaps with just a little more caution and scepticism than before.

Juan Navas, a journalist and former information secretary at the Royal Court, will be writing a series of articles about Swedish royalty in the run up to the royal wedding on June 19th. From next week he will also be writing a royal wedding blog.