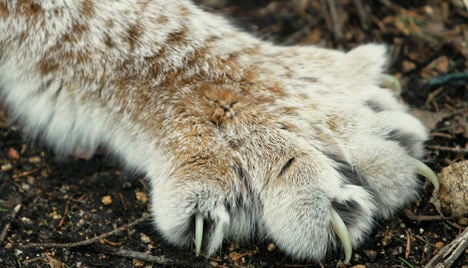 The dog whined and then barked before bounding to the fence and jumping up, straining against its lead, seemingly unsure how to react to the cat on the other side.

Rather than fluffing up its tail and disappearing into the woods, the cat leapt towards the fence too, racing up and down, ready to play.

“The dog would have the short straw if they were put together,” said Ole Anders, the man in charge of the enclosure.

“They might be about the same size, but Pamina’s claws are five centimetres long and razor sharp, and although she would want to play, things could quickly turn nasty and the dog really wouldn’t have a chance.”

Her almost tabby coat glossy in the spring sunshine, Pamina’s elegant whiskers and sleek face are so very catty, it is tempting to ignore the parts which mark her out as a lynx.

But she stands at nearly hip height, her legs are sturdy and tipped with very big paws, her tail is chunky and only about a quarter the length one might expect – and of course her ears are elongated by the signature tufts of fur on the top.

Pamina and her companion Tamino, as well as another pair, Atilla and Bella, can be seen in large enclosures just outside Bad Harzburg in Germany’s central Harz mountain range. There are public feeding sessions twice a week when people are welcome to come and see them at close quarters.

They cannot be released, having become too tame to fend for themselves in the wild. Pamina, for example, was raised with an Alsatian, hence her enthusiasm for visiting dogs. Their relatives in the mountains are more difficult to spot, but are a quiet success story of wildlife management in the region.

There are some 60 wild lynxes living in the Harz, said Anders, who leads the reintroduction and monitoring project. They live alone, hunting in the evening and at night, snacking mostly on deer, but also smaller mammals such as rabbits and even mice.

Oversized paws make snowy weather an advantage as the lynxes do not sink in as much as their prey. And their powerful legs are used to sprint and leap – they are not long-distance runners, more likely to sneak up and attack from relatively close quarters.

Although lynx jaw lines are generally defined by the shaggy sideburns of fur that contribute to their characteristic profile, their musculature is very powerful, and they kill with one sustained bite to the neck.

Lynxes used to be relatively common across Europe, including Germany. But the wild spaces which they need were reduced in size and although they do not have the bad reputation of wolves, they were hunted to extinction. The last one in Germany is thought to have been killed in 1818 during an organised hunt – an engraved stone was even later erected to mark the spot and can still be seen near Lautenthal.

The reintroduction programme is the result of cooperation between the Harz National Park, the state governments of Saxony-Anhalt, Lower Saxony and Thuringia, as well as the Lower Saxon state hunter forestry associations.

Anders managed to get all these bodies to support the idea and in 2000 he and the lynx team started releasing the first of 24 adult lynxes over the following six years. They came from wildlife parks and zoos in Germany, Sweden and Finland.

Anders said he was optimistic that having gained the broad support of the hunting community, the population would thrive. Currently one or two are found dead each year – often hit by cars. And despite their shyness, they are also seen in the region with around 200 sightings reported to the lynx team each year.

The last fatality was found in March – a male which Anders said looked as if it had died as a result of a fight with another lynx, a very rare occurrence.

The Harz lynxes have been breeding since 2002, when the first babies were observed, and now he and his team see evidence of between 10 and 16 cubs each year.

Anders said that although the current Harz population seemed healthy enough, it would need genetic variety from outside to remain so in the longer term.

He monitors a handful of the lynxes, which have been kitted out with collars carrying radio transmitters, and now a couple with GPS transmitters. These enable Anders and his colleagues to work out what territories the lynxes have and to track their movements and thus behaviour.

There are encouraging signs of exploration, with one monitored lynx having moved away, as far as Kassel area in the neighbouring state of Hesse. But the Harz population is still isolated and Anders’ animals would need to travel pretty far to meet other lynxes further south and east.

Happily for the Harz lynxes, the undeveloped former course of Iron Curtain passes straight through their domain and down to the Czech border. Anders will be watching the data from GPS and radio collars, fingers crossed that some of the more adventurous of his charges will head south to meet some Bohemian friends.

Pamina and other lynxes can be found by visiting the Haus der Natur in Bad Harzburg. It has a well laid-out and child-friendly display about the cats and other woodland creatures.

From there either hike or take the electro-bus to the lynx enclosure, where on Wednesdays and Saturdays public feeding takes place at 2:30 pm.