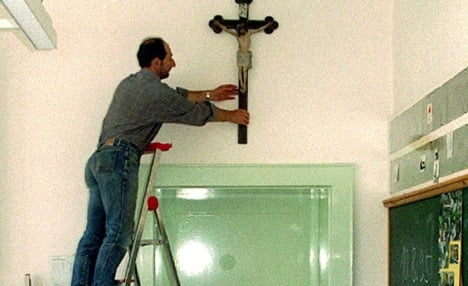 The conservative Christian Democrat Böhmer told broadcaster Deutschlandfunk that crucifixes are part of “centuries-old Christian traditions in Germany” and an “expression of our tradition and understanding of values.”

Böhmer’s remarks came in response to calls by Aygül Özkan – who will become Germany’s first woman Muslim minister at the state level this week. The minister-designate told Focus magazine over the weekend that schools should be secular areas.

“Christian symbols do not belong in state schools,” she said, adding that she also supported a ban on headscarves in educational institutions.

Özkan told the magazine she had negotiated with Lower Saxony’s state premier Christian Wulff, also from the CDU, to incorporate responsibility for integration into her new job, taking it from the Interior Ministry.

Böhmer told Deutschlandfunk that she approved of Wulff’s decision to add Özkan to his cabinet, calling it “really trend-setting.”

The 38-year-old intends to shake things up in the state, and has also called for fellow Turkish-Germans to make more effort to integrate.

A successful manager, Özkan joined the CDU in 2004 and quickly rose through the regional ranks of the party to reach the Hamburg city council in 2008.

The debate over religious symbols in schools came as federal and state integration officials planned to gather in Oldenburg on Monday.

PARTNER CONTENT
How this union supports and serves academics in Sweden