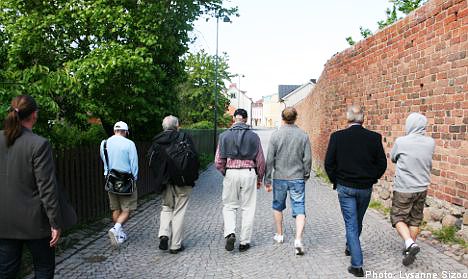 However, Truls felt a dedicated monastic home within prison grounds was needed to allow some of the men to continue living in a religious community. And so it came about that St. Ingrid’s Monastic House was inaugurated a year ago within the grounds of the newly renovated Skänninge prison.

“What strikes us when we have visitors is that everyone thinks we’re so special”, says Niklas, leading the conversation as we sip coffee in the communal living room.

“But we just see this as our daily life, we don’t know any better.”

They explain why this permanent spiritual home was so necessary.

“You feel you have become different inside and you want to live according to this new sense that you have about yourself and others,” continues Niklas, “and that becomes very hard while you’re still living on regular prison corridors”.

“Apart from the general cursing and cussing there is not necessarily an overriding will-to-good, and there are drugs, violence, and people invested in knowing you as you were and not as you’ve become”, adds Christer.

While none of them would claim that are overnight saints themselves, they crave peace and quiet to develop greater inner strength and resourcefulness. One after the other they applied to come and live at St. Ingrid’s and the first of the three houses on site is now fully inhabited.

For years the men had become used to being locked into their individual cells from early evening until early morning, with the television the only form of company. Here the men have the freedom to come and go within the house between 07:45 in the morning and 19:45 at night.

Peter says, “the first weeks here weren’t even really about deepening my experience of the thirty days retreat. We had to learn how to negotiate the sharing of a common space, what programmes to watch on television, as well as all the other aspects of living together in a community that has to develop its own rules rather than follow the rigid social rules of ordinary prison life.”

Greater freedom demands greater responsibility and they have a unique trusted position in the prison community as they carry out food and laundry deliveries. So how have the other inmates at Skänninge reacted to this influx of Brothers from Kumla?

“Some feel we have taken their jobs, and were not happy to see us here at all. Also, we live quite apart from the rest of the prison community and so there are some who think we’re a little weird”, explains Christer.

“But during study hours and while we go about our tasks, some have also expressed an interest and want to know more about the retreats at Kumla”.

The daily routine of Canonical hours and meditation was agreed upon in advance, as well as their contribution to prison life. They get up and attend their first service of the day at 7:30, which means being up and in the chapel before the outer door is unlocked. Mid-day prayers are held at 11.30, and evening prayers follow at 20.00, after lockup. They seem to radiate a deep inner peace. So are they Christians now?

“Christianity is not really what this is about”, they reply. Kari adds, “it is about finding myself, and building on that”. Others value the realisation that they are more than their criminal personae. Peter has embraced Buddhism and one of the latest applicants for a place in the community has an Islamic background.

Insiders on the outside

Some men will be coming up for release in the coming years and Truls has lobbied hard for a penal halfway house to be created in nearby Vadstena. The men have been given unique permits to visit the emergent halfway house as a group. While Truls grumbles about the men having to leave mobile phones at home, most are just surprised that I have never been to Vadstena, one of Sweden’s most historic towns, and home to the Sisters of the Bridgettine order.

While the Brothers head off to change into their normal clothes, Leif, our one and only designated driver/prison guard appears. When the men return we all tumble into the minibus for the 30 minute drive to Vadstena.

Sitting between Kari and Peter I reflect on the intensity of the silence as one by one they quieten during the first ten minutes of the drive. I sense them savouring the moment that the prison slowly disappears from sight. It is also in this transitional moment of being ‘men on the inside’ to ‘men on their way to the outside’ that the photographs of their children come out to be shown. Paternal pride is mixed with the heartbreaking truth of having acted in such a way as to lose the freedom to father their children as they would wish. And yet, having experienced the retreat, there are new and positive ways in which relations with family and friends have been affected. Peter describes “new meetings, of mutuality and equality”. And it is a new experience to be the one that may offer emotional and sometimes spiritual support to relatives and friends, instead of being the one that causes pain.

When we arrive at the main square in Vadstena, a journalist, a priest, a guard and five inmates, we could easily be taken for a group of tourists venturing out into one of Sweden’s most historical places. Father Truls beams all the way while his beady eyes pick up every nuance and shift in emotion that the men experience. From the moment they completed their silent retreat, not only did they have a more positive expectation of themselves, just like Truls, but gradually they also won the trust of the prison system. And it is this trust, and wanting to prove them right, that makes the outing to Vadstena as relaxed and easy as it is. Leif calls them an “exceptional group”, and this outing an “exceptional experience within the prison system”.

As we wander around I realise Truls’ masterstroke in situating a halfway house in a community that so closely resembles the lives that the Brothers try and develop behind bars. The Ignatian retreats have given these men an identity that allows them to connect with monastic communities on the outside, avoiding the more usual experience of feeling an outsider upon release and not fitting in. The rigours and disciplines of monastic life are brought home to us by the hardworking nuns of the Bridgettine order a little later that day.

Truls leads us away from the main house into a residential area where three small cottages encircle an inner garden. These are the houses that have been given on loan by the Bridgettine sisters to Skänninge prison, and that are destined to become the first halfway house for the Brothers.

At the sound of car horns blearing and people shouting, we all rush outside to see what’s up. Mother Carin and Sister Maria have arrived with a large truckload from IKEA. They are trying to back it into the small driveway between two of the houses with other sisters shouting out “left, right, stop!” The Brothers help unload the tables, chairs, desks and piles of flat packs, that constitute the building blocks of new lives built on hope. It is touching to see the joy and the energy with which the task is fulfilled.

Niklas, the first to become resident here if all goes well, steps back for a moment and in answer to my “how does it feel?”, says “This is makes me feel so much safer about the future, seeing this, knowing it is here that I can come to and take what is also my next step.

At the end of the day a guard and five reliable, responsible, warm and considerate men, wave us goodbye from behind the windows of the minibus. As one of them puts it so succinctly, “I have behaved in a way that led to me losing my freedom. But I have found a new inner freedom. And I am, because of the monastic house in Skänninge, able to deepen that inner freedom, and grow stronger in myself. And so although it is sad to be returning to prison after a day such as this, while I serve out my time, it is the best and most inspiring place to serve it.”