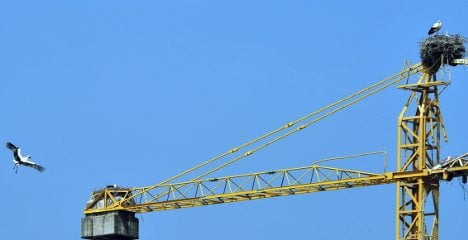 The stork-friendly crane in Kirchheim with two of the five nests. Photo: DPA

“We’ve never had this,” said Oda Wieding, head of the project for protection of the white stork at the Bavarian Association for Bird Protection.

She explained that a company deliberately left its crane standing in 2005 after a pair of storks built a nest in it.

Now these have been joined by four other pairs, making the crane an attraction to stork fans.

Normally storks are pretty territorial, said Wieding, protecting their areas so that they and their young have little competition for food.

But Kirchheim seems to be deemed bountiful enough for all five stork families – so much so that they have nested in the same spot.