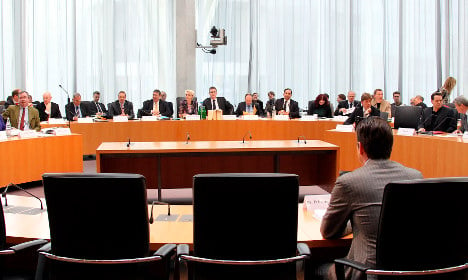 In his long awaited appearance before the committee of MPs investigating the deadly attack, Guttenberg was forced to defend his sacking of two top advisors in the wake of the affair and faced pressure to explain why he had at first insisted the air strike had been “militarily appropriate.”

The affair has dogged Guttenberg for months, mainly because of questions about his handling of the information about civilian casualties, even though he had not actually been Defence Minister when the strike occurred.

German Colonel Georg Klein gave the order on September 4 last year to bomb two petrol tankers that had been hijacked by the Taliban. The air strike killed up to 142 people, among them dozens of civilians.

In his testimony, Guttenberg praised the recent federal prosecutors’ decision to clear Colonel Klein of any criminal wrongdoing. The decision recognised the special situation of soldiers deployed in combat, Guttenberg said, adding that case had “also had an impact on the trust our soldiers have in politics.”

In his evidence to the committee, Guttenberg defended sacking his two top advisors, claiming they had withheld information from him. Guttenberg insisted at the beginning of November that the air strike had been “militarily appropriate” but later turned 180 degrees on that assessment.

Guttenberg admitted he had made a mistake in his initial assessment. For that “misjudgement,” he took full responsibility, he said.

He had chosen that wording based on an “unambiguous, unequivocal” technical briefing from his ministry and the military, he said. But he acknowledged he had been “rightly criticised” for his initial appraisal that the air strike “had to happen.”

Later, he revised his assessment and described the bombardment as not militarily appropriate.

Of the sacking of Army Chief of Staff Wolfgang Schneiderhan, and ministry official Peter Wichert, Guttenberg said his faith in these top advisors had been “unsettled” because they had not told him everything about the attack.

As a new minister in his first weeks in the defence portfolio, he had been dependent on his advisers, he said. The air strike had taken place before he took the job. When he made his first assessment, he knew only of the NATO report and of a report by the International Committee of the Red Cross.

Then on November 25, he had learnt that Bild newspaper planned to report on a military police assessment. Only after asking several times did he get Schneiderhan to tell him about that report, Guttenberg said.

“Who is responsible for providing the information here?” Guttenberg said in the inquiry. “Certainly not the minister.

“My standard has always been that I make my decisions based on the fullest possible information.”

The documents later presented to him had contained more detailed criticisms than the ones he had on November 6. In particular, civilian victims had been clearly identified, he said.

The conduct of Colonel Klein was understandable, he added. Klein had not known when he made his decision to call the strike that civilians were on the scene.