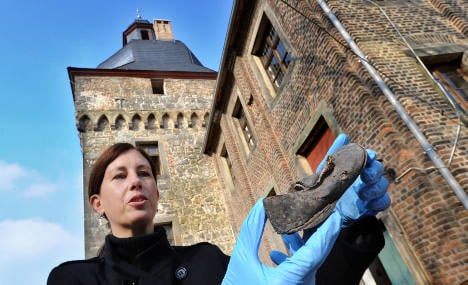 Eight women’s, men’s and children’s shoes were uncovered within the wall during restorations at the Liedberg Palace in Korschenbroich, a spokesperson for the Neuss district authority said.

Scholars working for the authority believe that the shoes were immured 12 metres high in the wall around 1708, she said.

While most of the shoes were heavily worn, they were high-value Baroque models that probably belonged to the family of the castle lord.

Two other pairs of shoes from the 19th century were also found in the wall.

According to the spokesperson, the find is not uncommon. Scholars frequently find shoes in walls during monument restoration – but there is no official explanation for their presence.

Some clues point to a superstitious, symbolic ritual meant to ward off bad luck for the building’s residents or builders.

Neuss authorities said the shoes will be cleaned, examined, documented and later placed back inside the palace wall.