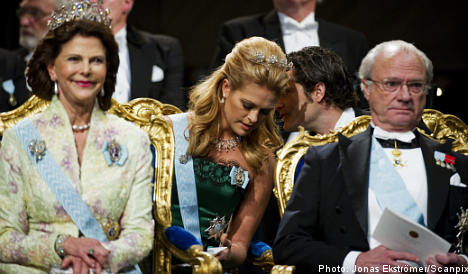 When the couple became engaged last autumn, it was made clear that the wedding would be delayed until after elder sister Crown Princess Victoria had been married to Daniel Westling. The Crown Princess’ high profile wedding takes place on June 19th in Stockholm.

Jonas Bergström told news agency TT when announcing the couple’s engagement that their wedding was planned for the late autumn or during the winter of 2010.

But it has now been made clear that the couple will in fact not take their nuptials this year, amid widespread Swedish media reports that indicate that couple are going through a rough patch in their relationship.

“Unfortunately, there will be no wedding this year. It goes without saying that there is a lot going on right now… I think that Madeleine has the right to a quiet time at her own wedding,” Queen Silvia told the newspaper.

The announcement in August 2009 that Madeleine was due to follow Victoria down the aisle took many royal watchers in Sweden by surprise, coming so soon after her big sister’s announcement.

Princess Madeleine, who is 197th in line to the British throne through distant family links to Queen Victoria, and Jonas Bergström, who is a lawyer from the exclusive Stockholm suburb of Djursholm, have been together for eight years.