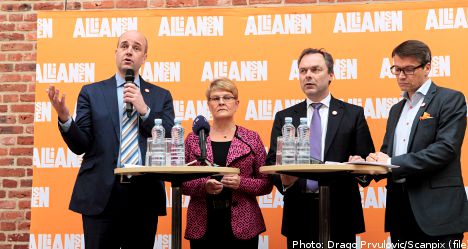 The new certification system will apply to both pre-school and school teachers.

A person can be certified in two ways – through completing their teaching degree or through the completion of a university level degree in addition to further teaching qualifications, the four Alliance government party leaders write in an opinion article in the Dagens Nyheter daily on Monday.

Fredrik Reinfeldt, Maud Olofsson, Jan Björklund and Göran Hägglund also propose that a mentor system be put in place to supervise new teachers for an introductory year. Only after the completion of the introductory year can a permanent employment contract be offered.

“Only when the teacher has passed their first introductory year on top of an approved formal education can they become fully certified,” the party leaders write.

The Swedish Teachers’ Union (Lärarförbundet) has welcomed the move.

“It improves the quality of the schools. This, together with tighter demands on qualifications, also strengthens teaching as a profession,” union chairperson Eva-Lis Sirén told news agency TT.

She criticised the government however for not earmarking the funds for the initiative.

“The money for this is part of the general municipal pot. We know that times are tough and municipalities can thus elect to use the funds for something else. We hope that the government returns with clear guidelines.”

“Education Minister Jan Björklund should be commended for having been careful to keep the promise to teachers over certification, as it was an election pledge in 2006,” said Fjelkner.

She also believes that it is important that the money actually goes to those who will serve as mentors and not into “a municipal black hole”.

But she also expressed “deep concern” over the working situation of teachers in Sweden’s schools.

“The government writes that a qualified and dedicated teaching staff is needed in order to achieve good results and I agree. But the actions of the government’s party colleagues in the Swedish Association of Local Authorities and Regions (SKL) in collective bargaining negotiations may be negating the positives,” she said, referring to ongoing pay negotiations that are close to deadlock.

“SKL want to lock in teachers and has no trust in them to prepare their lessons when they have the best opportunity to do so. They are the same parties but they act completely differently,” she says.