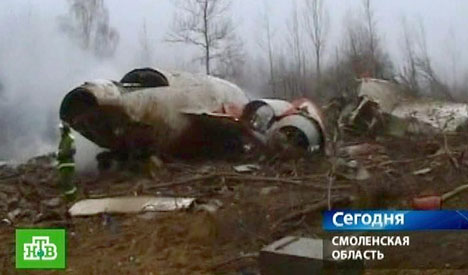 “I am deeply shocked by the plane accident and the death of the Polish president,” she told journalists on arriving at the Bundeswehr headquarters in Potsdam, outside Berlin.

Kaczynski, 60, was killed when the Tupelev 154 jet carrying him crashed neared Smolensk airport, about 275 miles west of Moscow.

It is believed the plane hit trees as it was approaching the runway in thick fog at around 11 am local time Saturday and then caught fire. Pictures from the scene showed charred parts of the airplane strewn across a wooded area.

The regional governor told Russian television there were no survivors. Polish officials have also said that everyone on board the plane was killed.

The number of people reported to have been on board the aircraft varies. Polish authorities put the figure at 88, while Russia’s Ministry of Emergency Situations said 96 had died and Russia’s Investigative Committee said the total was 132.

They were all flying to a Katyn for a commemoration of Russian and Polish victims of Soviet leader Josef Stalin.

In Warsaw, Prime Minister Donald Tusk called an extraordinary meeting of his cabinet and the national flag was lowered to half-staff at the presidential palace. In the case of a Polish president’s death, the speaker of the lower chamber of parliament takes over as head of state.

Poland’s president is commander-in-chief of its armed forces but the position’s domestic duties are chiefly symbolic.