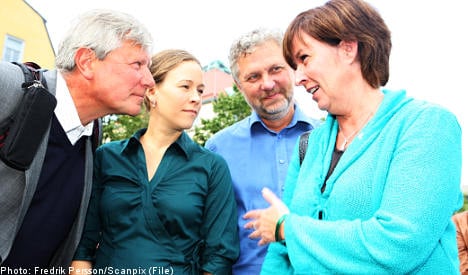 The three-party opposition partnership jumped 2.2 points month on month to score 52.4 percent in the latest Demoskop/Expressen poll, while the four-party Alliance dropped 0.9 points to 43.7 percent.

The Green Party saw an increase of 0.7 points for an April total of 10.3 percent as political scientists speak of a “Wetterstrand effect”, referring to the growing popularity of Maria Wetterstrand, one half of the party’s leadership duo.

“There has been an underlying trend in which green issues have gained a stronger foothold. Confidence in our party has grown successively over the course of a number of years,” Wetterstrand told Expressen.

Of the four Alliance parties, the Moderates and the Liberal Party both saw their share of voter support grow. Prime Minister Fredrik Reinfeldt’s Party rose 0.8 points to 28.1 percent, while Minister for Education Jan Björklund watched his Liberals climb 0.4 points to 7.6 percent.

The Christian Democrats and Centre Party however find themselves in serious danger of missing the four percent level necessary for parliamentary representation, according to the poll of 1,008 potential voters interviewed from March 31st to April 8th.

Headed by Göran Hägglund, the Christian Democrats shed 1.6 points to drop below the threshold at 3.7 percent, while Maud Olofsson’s Centre Party fell back 0.5 points for a perilous total of 4.2 percent.

Of the parties not currently in parliament, the Sweden Democrats dropped 1.1 points to 3.2 percent, while all other minor parties amassed a combined total of 0.7 percent, down 0.3 points on last month’s Demoskop poll.