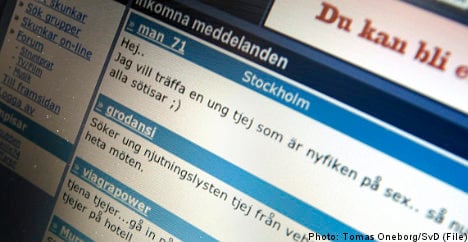 “The so-called grooming law which came into force last July forbids sexually motivated contact with children over the internet. But the adult has to take some sort of initiative in that contact for it to be an offence – to arrange a date, buy a train ticket or such like,” said Jonas Persson of the Swedish police to The Local on Friday.

In the six months after the law was adopted the police received only 100 reports, despite the fact that more than half of Swedish girls aged 15 to17 claimed to have been subject to grooming attempts by adults over the internet before reaching the age of 15, according to a National Council for Crime Prevention (Brottsförebygganderådet – Brå) report from 2007.

The law does not allow for the closure of websites or the prosecution of those behind them. Jonas Persson explained why:

“I don’t think a tightening of the legislation is desirable – it would come dangerously close to encroaching on freedom of expression legislation,” he said.

Legal obligations for those behind websites visited by suspected paedophiles and would-be “groomers” extend only to the removal of pictures and films which feature minors, or the publication of personal information.

The Local has received information that a man resident in Stockholm is alleged to be behind a chat forum serving as a contact point for paedophiles and hosted by PRQ – a Swedish web-hosting firm run by Pirate Bay co-founders Gottfrid Svartholm Warg and Fredrik Neij, and also noted for hosting the Wikileaks whistle-blower website.

Anti-paedophilia activists claim to have made attempts to persuade PRQ to close the man’s website but to no avail.

A statement on PRQ’s website cites freedom of expression as the over-riding ethos of their business model.

“We are big fans of free speech and free trade and let our customers practice those in full, within the limits of the law, irrespective of how odd, unpopular, sensational or controversial the activity may be.”

“Our contracts have no clauses which forbid offensive, insulting, or pornographic material,” the company declares.

The Local has made attempts to contact PRQ on Friday but calls have not been returned.