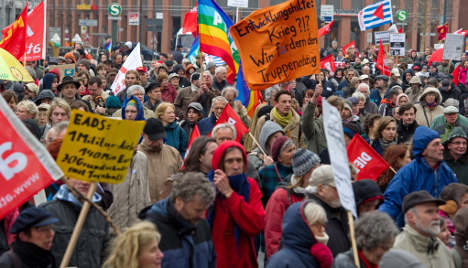 Hundreds of people marched on Monday in Berlin. Photo: DPA

Organisers said on Monday they had been pleased with the turnout for the marches in 80 towns and cities across Germany, saying in a statement they had been a “clear demonstration against militarisation and war.”

The traditional Easter demonstrations, which began as anti-nuclear protests in West Germany during the Cold War, celebrated their 50th anniversary this year.

They reached their highpoint in the 1970s during the Vietnam war and 1980s following the NATO “double track” decision to deploy Pershing and Tomahawk missiles in Europe. In those times, hundreds of thousands of people took the streets at Easter.

“The news at Easter reminds us of the easily forgotten, brutal reality of the Afghanistan war and also of its hopelessness,” said Manfred Stenner, the head of the Network of the German Peace Movement, one of the co-ordinators of the marches.

Afghanistan has loomed large this Easter, after three German soldiers were shot dead by Taliban insurgents and six Afghan soldiers killed by the Bundeswehr in a “friendly fire” incident on Good Friday.