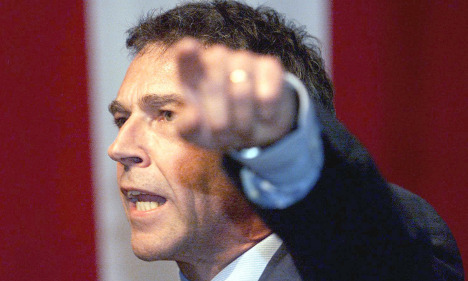 The Freedom Party of Austria (FPÖ) won electoral success with a far-right anti-immigration platform under the late Jörg Haider, who started his political career as a liberal.

Westerwelle had “pitted one minority against the other: the long-term unemployed against low wage-earners, the poorest against the poor,” Sommer told Monday’s Hamburger Abendblatt.

“Against the background of German history, that is explosive,” he said.

Sommer likened the divisive tactics to those of Haider, who died in a car crash in 2008, three years after he had split with the FPÖ and formed a new party.

“There, we had the situation where a liberal party has developed in a completely different direction, namely the FPÖ,” he said.

“I view with great concern the fact that social divisiveness and dangerous tendencies for social cohesion are developing in Guido Westerwelle’s FDP. I think the danger is very great that the FDP is drifting in a populist direction. Under the influence of another vice chancellor, Jürgen Möllemann, the FDP has once before leaned towards a right-wing populist tone.”

Former FDP leader Jürgen Möllemann quit the party in 2002 after being criticised for putting out an election campaign flyer that many people deemed anti-Semitic.

Sommer added that Westerwelle was casting doubt on the value of social equality – an impression Sommer took as “an alarm signal.”

Westerwelle sparked a storm of controversy in February with his attacks on the welfare system. He compared Germany to the “decadent” late-Roman period and said workers were in danger of becoming the nation’s “suckers.”