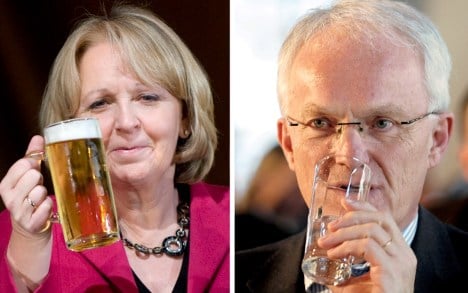 The election on May 9 would on the poll’s projections deliver a majority neither to the incumbent Christian Democrats-Free Democrats coalition, nor to a partnership between the Social Democrats and the Greens.

The poll, taken by Emnid surveying firm and published in Bild am Sonntag newspaper, puts Premier Jürgen Rüttgers’ CDU on 38 percent, the FDP on 8 percent – not enough for a majority.

The SPD meanwhile are on 32 percent and the Greens on 12 percent – also a significant shortfall.

Contesting in the state for the first time, the socialist Left party has the support of 7 percent of voters, according to the poll.

That means a CDU-Greens coalition would just scrape into a majority, or the SPD, Greens and Left could band together to form a government – though SPD state leader Hannelore Kraft indicated her party would not enter such a coalition, telling Bild am Sonntag the Left were “neither ready to govern nor want to govern.”

The election could have a profound effect nationally. With North Rhine-Westphalia the country’s most populous state and an economic powerhouse, a loss for the centre-right coalition would inevitably be seen as a vote of dissatisfaction with the federal coalition of Angela Merkel’s CDU and Guido Westerwelle’s FDP, which has been struggling amid internal squabbles and lack of direction.

Furthermore, a loss for the CDU-FDP could strip the federal government of its majority in the upper house, or Bundesrat, in Berlin.

The poll reveals a startling drop for the Volksparteien – or people’s parties, the CDU and SPD – compared with the last election in 2005. Then, the CDU carried 44.8 percent of the vote and the SPD 37.1 percent.

Rüttgers‘ personal popularity stood at 48 percent while the SPD’s Kraft was favoured by 35 percent of voters.