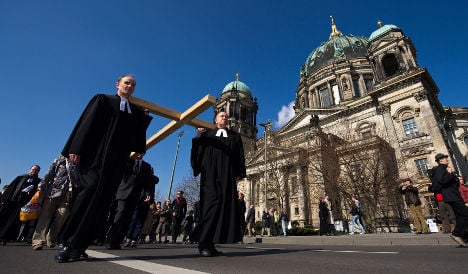 Meanwhile, protesters and church leaders used the day marking the crucifixion of Christ to mount calls for peace.

The acting head of Germany’s Protestant churches, Bishop Nikolaus Schneider, made a strong condemnation of the war in Afghanistan.

“We run the danger of the mission completely losing its legitimacy,” Schneider, who is currently head of the Protestant church umbrella organisation the EKD, told the Hamburger Abendblatt.

Meanwhile thousands marched for peace in Dortmund, Heidelberg, Hamburg, Biberach and the Hessian town of Bruchköbel. They protested against against the Afghanistan war as well as Germany’s weapons export trade and nuclear weapons.

In Dortmund-Bittermark, a southern part of Dortmund, about 2,800 protesters gathered, among them many French activists.

Other people had enough to worry about keeping their travel timetables. Deutsche Bahn reported having to throw some people off an ICE train in Marburg on Friday because it was simply too crowded. “It’s not as if the train was shorter than usual,” a spokesman said.

“We actually had between 14 and 25 kilometres of backed up cars the whole time,” said a police spokesman in the northern city of Kiel.

In a more traditional procession, Christian believers walked through the downtown Berlin to celebrate the Passion of Christ. Several hundred people walked through the city, converging on the historic Bebelplatz where a large wooden cross had been erected.