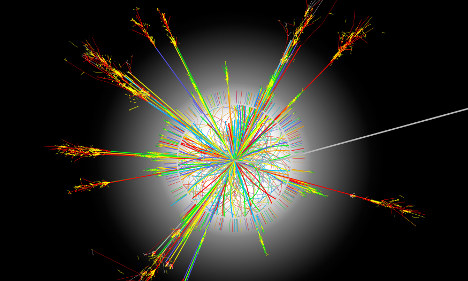 Confused? Physicist Thomas Neumann, from the German Electron Synchrotron research centre, is one of many German scientists involved in the project. He spoke to The Local about some of the more mind-bending expectations for the world’s biggest ”atom smasher.”

So how would you describe the feeling among physicists right now?

There’s a huge sense of excitement. It’s not a coffee machine that you just switch on. We’ve been building it for 15 years and now we’re really looking forward to doing some serious physics.

How long will it be before you see real results?

It depends on the mass of things like the famous Higgs particle – we don’t know how heavy they are so we don’t know how much energy is needed to see them. Most of my colleagues think we’re unlikely to see any major discoveries this year.

Yes, this mysterious Higgs boson. What is it and why is it important?

The Higgs is the particle that gives everything its mass, which we expect the LHC will reveal. Think of immersing a metal sphere into a viscous fluid such as molasses – you encounter friction. If you try to accelerate it, you encounter inertia.

It looks like the whole universe is filled with this mysterious Higgs field, which like molasses, creates this viscosity and effectively weighs everything down. This is by definition mass in physics.

In a way, yes. This may be astonishing to non-physicists but in our theories, mass doesn’t have a proper place and in order to reintroduce mass, we badly need the Higgs particle.

We’ve been working for 50 years on a so-called Standard Model of elementary particles. It says that everything around us is made up of 12 fundamental particles held together by four forces (electromagnetism, gravity and two nuclear forces). The mathematics of the Standard Model works extremely well and lets us calculate and predict all sorts of things.

The only problem is that for the equations to work, we need to plug in this theoretical Higgs boson as a kind of mathematical trick. The Higgs is like a cornerstone to a gothic cathedral: if you pull it out, the whole system breaks down.

What if it isn’t there?

Then we scrap all our theories and start again!

We’re talking about the smallest things known to science. How will the LHC help us understand the enormity of the universe?

Yes, on the one hand we’re discussing the whole universe and on the other, I’m a particle physicist and investigating the tiniest particles of the world and this handshaking is a fascinating thing.

To look deeper and deeper into matter, you need more and more energy and hence larger machines. The LHC is a telescope into the sub-atmomic level.

The universe today is very complex but what we believe is that immediately after the Big Bang, when the universe began, it was actually very simple. Instead of four forces, there was a kind of single primordial force.

That’s where “supersymmetry” comes in – which is the other great goal for the LHC. If you give each of the 12 particles a theoretical partner – a “mirror image” – then mathematically it brings all the forces together into one. The LHC will be looking for evidence of that.

So to understand the essence of everything, we need to return it to something like its primordial form?

Exactly. We think the complexity today is just different expressions of one and the same symmetry. It’s like snowflakes – there are all these complicated shapes but there is one principle behind them all. They are expressions of one super-principle.

You can see the evolution of the universe like that – it’s the breaking down of a grand symmetry that the God-Father initially had in mind.

What do you mean God-Father?

I’m not religious but I have a spirit of admiration for how elegant the laws of the universe are. All physicists should have this or you wouldn’t get out of bed in the morning and go to work. The fact that the universe was extremely simple at the moment of creation is a quasi-religious belief of physicists. There is no guarantee. Why the hell should the world be simple?

Yet there seem to be pre-existing principles – and at some point you have to ask, ‘Who invented that?’ Einstein called it “Der Alte” (The Old Man).

Tell us about the mini black holes which caused so much fear. Are physicists seriously worried?

They would immediately decay and they would be much much too small to do any harm to anybody. Earth and all celestial bodies including the Sun have been bombarded by very violent cosmic radiation for billions of years. It’s happening right now and it reaches millions, even billions of times the energy that the LHC can create.

This cosmic radiation is performing 100,000 of these experiments per second in the Earth and 10 million with on the Sun. If these were to form black holes, we’d see them on every street corner.

But how are they created by the LHC?

In the universe, black holes are made when stars collapse on themselves and become incredibly dense, which creates an intensely strong gravity that can suck in other matter. Normally, gravity is an extremely weak force compared to, say, electromagnetism. A small magnet can hold up a paperclip against the gravity of the whole Earth.

But at the tiny distances of the sub-atomic level, gravity becomes strong. And if you go to high enough energies, and start probing gravitation at short enough distances – as we will with the LHC – gravity can become extremely strong and we may create these damned mini black holes that have created all that fear.

One possibility is that gravity actually expands into other dimensions, which is why it becomes weaker over distance much faster than other forces. So the LHC could indicate there are more dimensions than we see.

So there are more than three dimensions? How are we non-physicists supposed to grasp that?

What about the fun stuff? Could this help us build a time machine?

Not exactly, but it could help us get in contact with wormholes that would be a shortcut through space-time. It would be like travelling to Australia through the centre of the Earth rather than going via Singapore. Going over the surface of the Earth is like using two dimensions but it you use the third dimension by going through the middle, you’ll get there faster. This could give us the chance to use extra dimensions.

It’s connected to time travel to but it’s not what we normally understand as time travel. Space and time are indistinguishable – so if you take a shortcut through space you’d also be shortcutting time – but it’s useless for travelling. A graviton (a particle of gravity) could do it, but not us.

So how is all this actually useful? Why should the person on the street believe this is money and time well spent?

Look at history. The Neanderthal’s wife was asking, “Why are you beating stones together and not out getting food?” He was trying to make fire, even though it seemed completely useless.

Likewise, the roots of electromagetism were completely theoretical. Scientists were just curious that electricity and magnetism seemed to be connected. All these questions … were of no visible use at all. Then right after Heinrich Hertz’s discoveries (note: German physicist Hertz proved the existence of electromagnetic waves in 1887), the streets of Berlin got electric lights. Physicists almost never do things for the taxpayer. Science never worked like that. The greatest discoveries have come from pure curiosity.