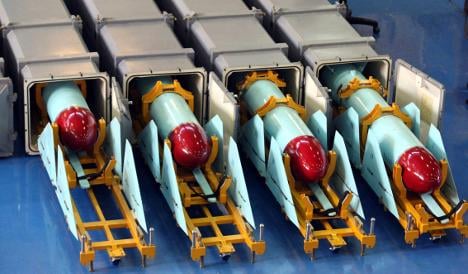 The Chancellery said in a statement that the “detailed and friendly conversation” also covered the economic situation in the two countries, the world’s number one and two exporters.

“The Chinese premier warmly welcomed the chancellor’s plans to accept his invitation and travel with a business delegation to China this year,” it said.

China and Germany are among the six world powers negotiating with Iran about its disputed nuclear programme.

Merkel has stepped up her rhetoric against the Islamic republic in recent months, saying the time was nearing for a new round of United Nations sanctions over its sensitive nuclear work.

But China, which is a veto-wielding power at the UN Security Council and recently replaced Germany as Iran’s biggest trading partner, is seen as far more reticent.

On climate change, China has overtaken the United States as the top emitter of carbon blamed for global warming and came under fire for what was seen as a foot-dragging role in December’s much-criticised UN climate summit in Copenhagen. But it, like Germany, has become a “powerhouse” in the field of clean energy with heavy investment in so-called green technology.