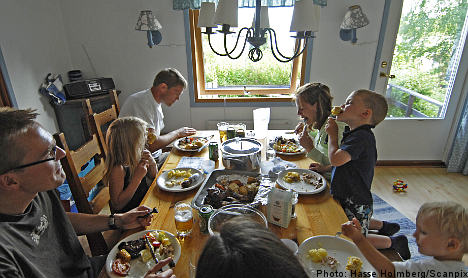 The centre-right government announced that the supplementary child allowance paid out to families with more than one child will be raised on July 1st 2010 in a change that will cost 700 million kronor ($100 million).

A further 100 million kronor will be invested in the creation of up to 15,000 summer jobs across Sweden’s municipalities.

“In a crisis it is the young that are sidelined first. It is difficult to find a first real job and often the summer job is the first step into the labour market,” enterprise minister Maud Olofsson said on Wednesday.

“Many municipalities already organize these types of activities. This is a boost for the whole municipal and voluntary sectors,” Olofsson said.

Summer schools will also receive a 20 million kronor boost in 2010.

The four-party Alliance has elected to raise the supplementary benefit instead of the statutory portion as it intends the funds to benefit families that are least well-off.

“To raise child benefits would cost a great deal of money and is not as precise. That would benefit families with the same economic situation as mine. But raising the supplementary benefit means that those with the weakest finances gain the most,” social minister Göran Hägglund said.

Hägglund argues that while there are relatively few larger families, they carry the heaviest burden.

“The more people living on one income, the less there is to go around,” he said.

“But it’s good that they are proposing something that we have long argued for in parliament,” said Johansson, who argued that the hike in the supplementary benefit was the correct move, but should have been more.