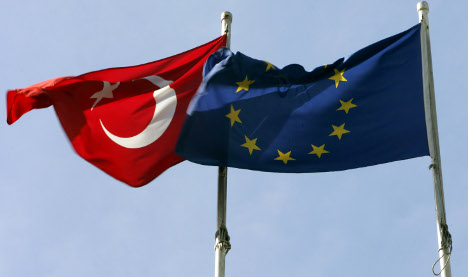 “The rules of the game have changed” since Turkey first applied to become a member of the bloc five decades ago, Merkel said through an interpreter after talks with Turkish Prime Minister Recep Tayyip Erdogan.

Along with French President Nicolas Sarkozy, Merkel remains one of the staunchest opponents of Turkey’s bid to join the European Union, arguing that a vast, relatively poor country with a mainly Muslim 71-million population has no place in Europe.

She has instead proposed a “privileged partnership” between Turkey and the bloc, an alternative Ankara flatly rejects.

Merkel however stressed the immediate task for Ankara was to open its ports to vessels from Cyprus – an EU member Ankara does not recognise – under a customs union accord with the Union.

“The most important issue is the implementation of the protocol… We have to deal with the Cyprus issue. That would be to the benefit of us all,” she said.

Turkey’s refusal to grant trade privileges to Cyprus has led Brussels to freeze talks in eight of the 35 chapters that candidates must successfully negotiate prior to membership. Since starting the talks in 2005, Turkey has so far succeeded in opening

Merkel also pushed Turkey on Iran, urging it to back Western allies in imposing a possible fresh set of sanctions over Tehran’s suspect nuclear activities.

“If Iran fails to take a clear step shortly, we will decide on the sanctions issue… Germany would be very happy if we could vote together with the United States, Europe and Turkey,” she said.

Erdogan, whose country holds a non-permanent seat on the UN Security Council, reiterated that he remained opposed to new sanctions against Iran and preferred diplomacy.

The two sides, however, appeared to have come to an agreement on another contentious issue in bilateral ties, that of opening Turkish schools for the estimated 2.5 million Turkish immigrants and their descendants in Germany.

Prior to Merkel’s visit, Erdogan put forth the proposal only for it to be immediately rejected by the German leader.

Merkel pointed out on Monday that there are already schools teaching Turkish in Germany, but that should not be used as a “pretext” for Turkish immigrants not to learn German and integrate with German society.

“Learning the language of the society one lives in is the precondition of integration. This is not assimilation,” Merkel said.

An aide to Erdogan said the prime minister’s proposal was misunderstood, explaining that Ankara was calling for schools abiding by the German education system and teaching both languages. Both countries should act to ensure “integration while protecting one’s cultural roots,” Erdogan said.

The Turkish community in Germany is the country’s largest ethnic minority and the world’s largest Turkish diaspora. While later-generation Turks have fully integrated with German society, large sections have never learned German and live in closed communities.

Merkel was scheduled to wrap up her visit Tuesday after touring historic sites in Istanbul and attending a business forum there.

Germany is one of Turkey’s principal economic partners – bilateral trade amounted to almost €25 billion ($36 billion) in 2008. More than 4,000 German companies operate or have partnerships in Turkey.