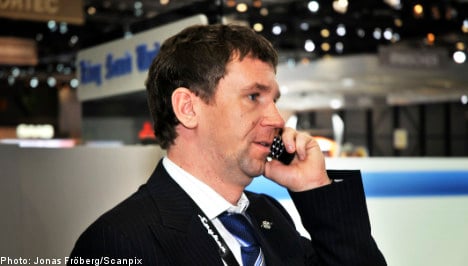 The Russian banker and former Spyker stakeholder was forced out of Dutch luxury car maker Spyker in order to facilitate its purchase of Saab from General Motors after the US firm expressed doubts about his suitability as an owner.

But on Monday Antonov claimed that a memorandum of understanding would be signed within the next month paving the way for the manufacture of Saab cars in Kaliningrad, a small Russian enclave lodged between Lithuania and Poland on the Baltic Sea coast.

“Yes, it’s true that an agreement is in the works,” Antonov told Swedish news agency TT, refusing to elaborate further.

Designated as a special economic zone by Moscow, Kaliningrad offers lucrative tax incentives for manufacturers and is already home to Hummer and BMW production facilities.

Vladimir Antonov revealed at the beginning of March that he was working to clear his name and persuade General Motors that the allegations of money laundering and organised crime which have circulated around his business empire are unfounded.

Swedish media have reported that the Saab-Spyker deal was delayed in late 2009 as an investigation ordered by the Swedish government into the workings of Spyker and its Russian investors landed on the desk of the FBI and put a temporary stop to the takeover.

Though forced to step aside as a condition of the deal, Antonov said his banks had financed the first downpayment to GM.