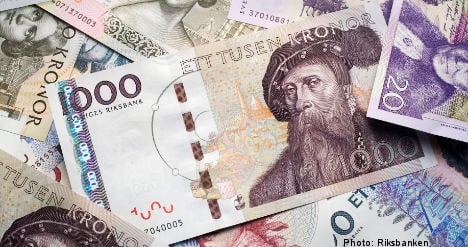 The envelope left in the collection bowl at Gustav Adolfskyrkan has distinct parallels to the donation of the same sum left by an anonymous woman at another church in the town on the same religious holiday in 2009.

But the pastor who gladly received the well-needed funds remained unconvinced of a connection.

“I don’t think it is the same person. The method of execution is too different,” said Patric Cerny of the Church of Sweden to local newspaper Borås Tidning.

The Local reported in April 2009 on the unidentified woman’s generous gift at the Caroli Church after a pastor appealed for donations for international aid projects.

On that occasion the woman waited until the end of the service before handing over the envelope and quickly leaving.

Cerny says that the money will be sent to the help organisation “Hela världen” (‘Heal the world’). He confirmed that he watched the bills being counted

“They looked like completely new notes, they were so smooth,” he said asking the newspaper to forward the church’s warm thanks to the generous benefactor.

The pastor told the newspaper that he now looked forward with awakened curiosity to Palm Sunday 2011 to see if more funds would be forthcoming.

Palm Sunday is a Christian festival which always falls on the Sunday before Easter Sunday. It is also known as Passion Sunday or Palm Sunday of the Lord’s Passion and commemorates Jesus Christ’s entry into Jerusalem.