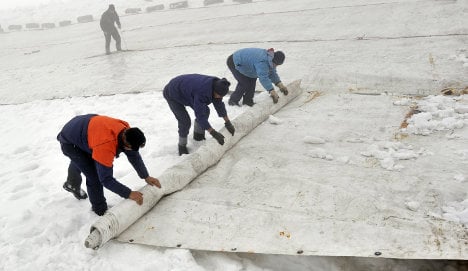 The glacier on Germany's Zuspitz mountain is covered up in summer Photo: DPA

It seems the long and chilly winter has taken its toll on climate change sensibilities despite the fact that weather has nothing to do with climate.

The latest figure is a clear drop from the 62 percent of Germans who said they were scared of such changes just in autumn 2006.

The new survey, carried out by polling company Infratest for Der Spiegel magazine, showed a quarter of those questioned thought Germany would profit from climate change rather than be badly affected by it.

Many people have little faith in the information and prognosis of climate researchers with a third questioned in the survey not giving them much credence. This is thought to be largely due to mistakes and exaggerations recently discovered in a report of the intergovernmental panel on climate change, the IPCC.

Germany’s Leibniz Community, an umbrella organisation including many climate research institutes, broke ranks by calling for the resignation of IPCC head Rajendra Pachauri.

Climate research has been put, “in a difficult situation,” said Ernst Rietschel president of the Leibniz Community. He said sceptics have been given an easy target by the IPCC and said Pachauri should take on the responsibility and resign.

Last summer the glacier on Germany’s highest mountain, the Zugspitz in Bavaria, was covered over with plastic sheeting to try to protect it from warm rain which threatened to accelerate its melting.