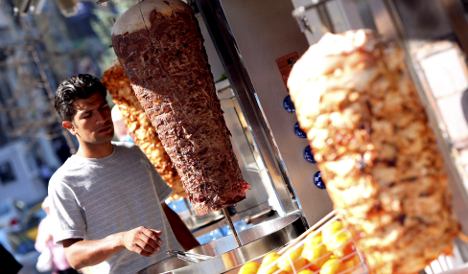 At least 200 professionals from the döner supply business were expected to fill the Ernst-Reuter Haus in the centre of the German capital on Saturday for the convention to make contacts, swap ideas and eye up the latest in meat-on-a-pole technology.

Until the 1970s döner meat had always been eaten on a plate – the story is that a guest worker in Germany was the first to wrap it in bread and add salad, sauce and loads of spices, unknowingly creating a new industry.

Now it is estimated that around 60,000 people work in the 15,500 döner shops around the country, while the idea has taken off in many other countries not only in Europe but also recently as far away as Vietnam.

The supply business is an interesting one in Germany, with only around 100 companies supplying the 122,000 tons of döner meat consumed here each year.

And while the döner shops are often teetering on the edge of financial survival, a good living can be made producing the giant spits of flash-frozen spiced lamb meat, according to Yunus Ulusoy, from the Centre for Turkey Studies in Essen.

“The spit producers have been very successful in the market for many years. Without them there would be no more döners,” he said.

He said stacking the slices of meat on and around the spit is considered a highly complicated and technical business, with most of those who serve the kebabs not being able or willing to make their own.

“Döner shops are often run in order to secure the financial existence of the family because there is no alternative, and not because one wants to work in the gastronomy business,” said Ulusoy.

The owners thus buy in the meat spits, pre-cut salads, pre-mixed sauces and ready-baked bread from the supply industry, he said.

These suppliers create and maintain customer networks through personal contacts and trust – which is often rooted in a common Turkish heritage, added Ulusoy.

Their knowledge of the Turkish language, culture and their understanding of the Islamic rules for preparing meat means Turkish-rooted suppliers are generally trusted more than Germans, said Tarkan Tasyumruk, chairman of the Turkish Döner Producers Association in Europe, ATDID.

Suppliers are often recommended by friends and contacts, he added, but said that the aim of the DÖGA meeting should be to increase competition between them in order to secure the long-term survival of the industry in Germany.

One suggestion to contribute to this is on show at the conference – the robotic döner slicer.

Using a digital camera and computer-steered knife, the robotic slicer can tackle any shape of döner spit, spotting uneven or uncooked bits of meat and adjusting its movement accordingly.

Its creators say it requires less space than a person, needs no training and eliminates not only accidents but also unpleasant human factors such as sneezing.