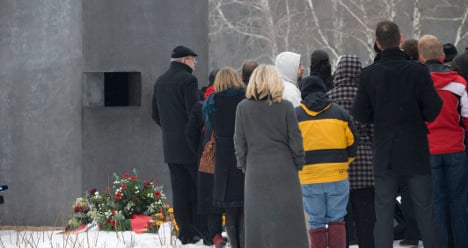 The monument was erected in May 2008 opposite the city’s large memorial to the six million Jewish Holocaust victims.

It is currently comprised of a concrete slab with a window through which viewers can watch a video of a “never-ending” kiss between two men.

Under the original plans, the video is to change every two years to feature two women locked in an embrace, meaning the switch is due in May.

But Alexander Zinn, a board member of the foundation that maintains the former Nazi concentration camps near Berlin, said such a move would distort history as there were no known Holocaust victims targeted for being lesbian.

He has banded together with other Holocaust experts and fired off a letter of protest to Culture Minister Michael Neumann and Berlin’s openly gay mayor, Klaus Wowereit.

Neumann defended the plans as true to the original concept of the memorial in addressing present-day discrimination against lesbians and gays as well as the plight of homosexuals at the hands of the Nazis.

“The option of using a lesbian film motif in the memorial is in no way meant to put on the same level the persecution of homosexual men and women under the Nazi regime,” he said in a statement.

“Research shows that the persecution of lesbian women by the Nazi regime was not comparable to that of homosexual men. This is also clearly explained in a plaque on the memorial.”

It is estimated that the Nazis sent between 5,000 and 15,000 gay men to concentration camps together with Jews, political opponents, gypsies, Jehovah’s Witnesses and others considered undesirable.

Once there, few were killed right away. Rather, they were held under degrading conditions, and subjected to hunger, disease, abuse and exhaustion. Very few returned.

A jury is to take a decision about the next video used at the memorial in the coming weeks.