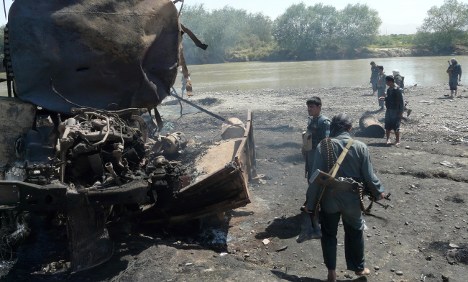 Bringing Merkel under direct pressure for the first time in the affair, news magazine Der Spiegel has cited an email sent by the Federal Intelligence Service (BND) to the Chancellery that stated: “The devastating thing about this is that scores of civilians have died (counts vary from 50 to 100).”

The email, sent on September 4 at 8:06 am, about nine hours after the strike happened, was headlined: “Crowd killed in explosion in Afghanistan.”

Two days after the air strike ordered by German Col. Georg Klein on two hijacked fuel trucks, then Defence Minister Franz Josef Jung maintained that according to his information “only Taliban terrorists” were killed.

The issue created a political storm in Germany just a few weeks before a national election, with the question of civilian deaths central to the public anger over the air strike, now known to have killed 142 people, many of them civilians.

Jung resigned from his new portfolio as Labour Minister in November, acknowledging he had mishandled the affair. Two senior defence officials also resigned, one of whom, army chief General Wolfgang Schneiderhan, recently attacked new defence Minister Karl-Theodor zu Guttenberg in a parliamentary committee inquiry as the affair continues to deteriorate into recriminations and counter-claims.

The new email evidence appears to demonstrate that the government had early notice of the civilian deaths from one of its own agencies. In addition to the chancellor herself, the email will put pressure on Merkel’s then head of the Chancellery and now Interior Minister Thomas de Maizière, who ultimately would have been responsible for passing on the information about civilian deaths.

Jung faced the Bundestag inquiry into the Kunduz affair on Thursday afternoon, denying that there was a cover up in his former ministry, calling any such accusations “defamatory.”

The former defence minister insisted that during his time at the ministry there was no certain count of civilian victims in the bombardment. Initial reports said only that “Taliban and their allies” had been among 56 dead.

Col. Klein confirmed this to Jung via telephone, he told the inquiry.

Only two days later did it become clear that the reports might be inaccurate, he said.

At this time the German government said that it regretted any civilian deaths resulting from the air strike, despite that fact that it still believed the “overwhelming majority” of victims had been Taliban.

Jung also defended Col. Klein’s orders, which some critics argue went against rules of engagement, saying that at the time the Bundeswehr was “in a combat situation almost daily.”

“The situation was heating up dramatically for our soldiers,” he said.