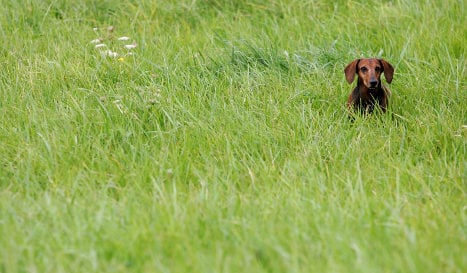 It was hard to imagine a dearth of dachshunds in Germany amid the last-minute flurry of brushing and fluffing at the German Dachshund Club (DTK) Saxony state champions show in Dresden.

More than 60 dachshunds of every variety – standard, miniature, long-haired, short-haired, wire-haired, black and tan, and red – swarmed the hall in a roly-poly uproar of barks and yelps last weekend.

Men and women dressed in woodsy German hunting attire, leather trousers included, kicked off the show with a round of bugling, which had an unexpected calming effect on the rowdy pack of hounds – if only for a moment.

CLICK HERE FOR A GALLERY OF THE DACHSHUND SHOW.

“Once a dachshund, always a dachshund,” she said, a phrase that other show participants echoed throughout the weekend. “It’s practically the country’s heraldic animal.”

Dachshund fans at the show put a brave face on the dog’s waning popularity, saying trendy breeds come and go, but the dachshund will always occupy a special place in Teutonic tradition. Some even contended that lower birthrates actually improve bloodlines. But their enthusiasm cannot belie the steep decline in the breeding numbers of this distinctive German dog.

In the English-speaking world, the stubby-legged, elongated canines are known as sausage dogs, wiener dogs, and their outdated German name, dachshund, which literally means “badger dog.”

Now called Teckel or Dackel in Germany, they were bred from hounds in the Middle Ages to flush badgers, foxes and other animals from their burrows, and became Germany’s smallest hunting dog, owned even by royalty such as Kaiser Wilhelm II – whose pair Wadl and Hexl were reportedly rather vicious.

While many Germans still hunt with dachshunds, the “robust, earthy, and plucky” qualities that make them good hunters are also the reason they have become a long-standing choice for the family hearth, DTK president Dieter Honsálek recently told The Local.

“They may be small, but their strong-minded personality is what makes them so lovable,” he said.

Where have all the puppies gone?

But according to DTK statistics, the number of dachshund puppies born in Germany has been shrinking for the last 40 years. Following the 1972 Munich Olympics, which were represented by plush dachshund mascot “Waldi,” the country saw a “Teckel boom” with more than 25,000 new puppies annually for several years. But that craze has long since subsided as other dog breeds became more popular, Honsálek said.

“We have the most beautiful male who has won many competitions,” said Günter Hunger, a jovial 73-year-old Brandenburg native at the show whose family has owned dachshunds for generations. “Ten years ago he would have been in high demand for breeding, but now there is very little interest.”

But the VDH numbers also show that despite their decline in numbers, dachshunds remain the second most popular dog in the country by a wide margin, behind the German Shepherd.

“Calling the situation a ‘dachshund crisis’ as the media does is a bit exaggerated,” said DTK judge Axel Komorowski, who ultimately chose jaunty wire-haired standard female “Xita vom Linteler-Forst” for the Best in Show award.

Both Komorowski and DTK President Honsálek admitted fashionable breeds such as the increasingly popular Golden Retriever are gaining ground in Germany, the dachshund’s versatility will keep it from being “threatened,” as the media has reported in recent years.

Some aficionados even believe dachshund pedigree is benefiting from more measured breeding practices.

Booms like the one spurred by Waldi’s popularity in the 1970s lead to irresponsible “production” in what are commonly known as puppy farms, Honsálek said.

“It’s established fact that bottom-line breeding with no thought to health, character and breed standards has damaged every breed that has come into fashion,” he told The Local.

He said that last year’s puppy levels of around 6,300 are at a “practical” level that can meet current demand from the breed’s most ardent supporters.

Meanwhile Petra Haupt and her champion dachshund Lucky are hard at work to make sure they carry on the tradition.

“This little one is going to be a papa soon,” Haupt said while kissing his black nose. “And we’re hoping he’ll be the 2010 champion in his class.”