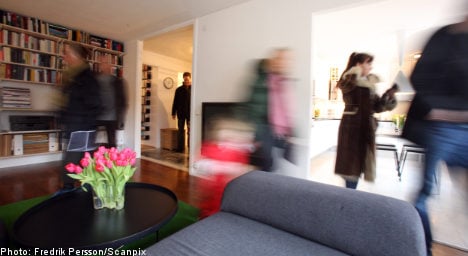 Svensson rejected several recent reports that the Swedish housing market is showing signs of a bubble.

“There are currently almost no risks at all, this is a myth,” he said.

The deputy-governor referred to a recent report by the Swedish Financial Supervisory Authority (Finansinspektionen – FI) on the situation for the housing market.

“Even if one makes extreme assumptions there will be very few households in financial dire straits, according to the report,” Svensson said in a seminar organised by the Centre for Business and Policy Studies (SNS) on Friday.

Irma Rosenberg, a former member of the Riksbank board, is however of another opinion. Rosenberg sees the rising mortgage burden and climbing house prices as a warning signal.

“If you look at the whole picture then one should be a little concerned, even if monetary policy is not the correct weapon to use,” she said at the SNS seminar.

Svensson has registered reservations at several meetings of the Riksbank board over decisions to leave base rates stationary, instead arguing that the repo rate should be slashed to zero (from a current 0.25 percent).

“We would have had a smaller production gap in the economy,” he explained.

“That a 0.25 percent lower rate would have created 16,000 more jobs does not add up to me. There must be something wrong with the model,” she said.

The Riksbank board has been roundly criticised for its interest rate forecasts and for raising the repo rate to 4.75 percent just weeks before the Lehman Brothers collapse in September 2008.

Svensson was one of those who voted for the rise.

“During the summer, inflationary pressure increased and the real economy weakened. I thought it reasonable that we continued along the interest rate path that we had projected,” Svensson said on Thursday.

“But not all have understood that in fact we eased monetary policy at that meeting by adjusting the repo rate path downwards,” he adds.

Svensson underlined that their decision would have been different had the board known that Lehman Brothers would collapse.