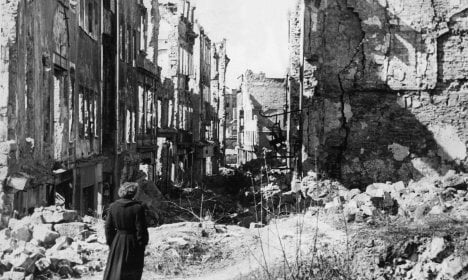 After more than five years of research, the Dresden Historians’ Commission released its final report on the firestorm unleashed by British and US bombers February 13-15, 1945, just three months before the end of the war in Europe.

The study is meant to resolve a bitter debate that has raged for decades, with far-right groups claiming that up to 500,000 people were killed in the “criminal” air assault on the Baroque city known as “Florence on the Elbe.”

Conservative estimates had put the death toll at around 20,000.

The panel of historians was convened in November 2004 by then mayor Ingolf Rossberg in a bid to put the issue to rest.

The commission reviewed records from city archives, cemeteries, official registries and courts and checked them against published reports and witness accounts.

The figure of 25,000 matches conclusions reached by local authorities immediately after the war, in 1945 and 1946.

The report also found that the number of refugees fleeing the horrors of the Eastern front who were killed in the bombing was lower than often presumed, and dismissed speculation that many victims’ bodies were never recovered.

Critics of the raids say they were strategically unnecessary, as Hitler’s Germany was already on its knees, and targeted civilians rather than military objectives.

The commission said its conclusions had far-reaching implications for history’s understanding of the war’s final chapter, and how Germans see their own role in the war.

“Remembering the Allied bombings of Dresden… still carries importance for the social-political understanding of how history is seen, how society is shaped, and how identities are formed,” it said.

“In this debate, the number of people killed in the raids on Dresden has long been a crux of the argument that is key to certain views.”

The raid on Dresden, previously almost untouched by the Allied air assault on Nazi Germany, sparked a firestorm which destroyed much of the historic city.

In February, some 6,400 neo-Nazis rallied on the 65th anniversary of the devastating bombing raids. They aimed to stage a “funeral march” as well, but around 12,000 counter-protesters blocked their demonstration.