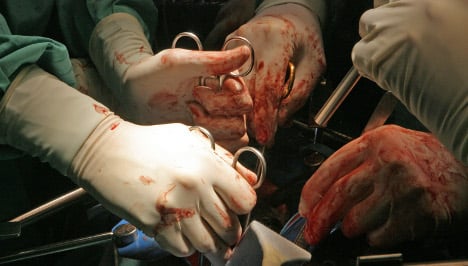 An inquest in Britain heard that Ena Dickinson, 94, died two months after surgeon Werner Kolb performed the operation in August 2008. During the procedure Kolb reportedly removed a bone he was not supposed to and severed a major artery, leaving her unable to walk.

Dickinson would have died immediately had a consultant not stepped in and taken over, according to statements made at the inquest. She was left bed bound and developed pneumonia, which killed her two months later.

The British health authorities who hired Kolb as a locum have apologised to the woman’s family and changed the way they recruit staff.

Kolb was hired for six weeks to cover holiday leave at the Grantham & District Hospital in Lincolnshire. The incident happened three weeks into his stint and he was fired the next day.

The 51-year-old, who is based at Bethesda Hospital in Stuttgart, told The Daily Mail newspaper: “I consider myself in no way guilty or responsible for the death of this woman. I can clearly recall that after the procedure she was in a good condition.

“She was old and there would always be a risk for a patient of her age but I repeat, the procedure was carried out properly and I say my work had nothing to do with her death.”

The case follows another incident with a German locum in Britain who accidentally killed a 70-year-old man by giving him 10 times the maximum dose of morphine in February 2008. That doctor, Daniel Ubani, was convicted in Germany and given a suspended jail sentence.

The incident sparked demands in Britain for a review of European Union laws that allow doctors to work across European borders without having to pass language and competency tests.