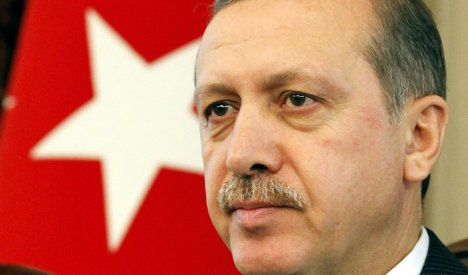 At the meeting last month, Turkish Prime Minister Recep Tayyip Erdogan urged Turks living in foreign countries to take out citizenship of the new homelands – not to integrate, but rather to become more politically active, according to the website of news magazine Der Spiegel.

Ali Ertan Toprak, deputy chairman of the Alevi community in Germany, told the magazine government representatives had said: “We have to inject European culture with Turkish.”

Erdogan told the meeting countries that did not allow dual citizenship violated basic rights and also likened Islamophobia to anti-Semitism.

Participants told Spiegel that Erdogan repeated elements of his widely criticised speech in Cologne in 2008 in which he said: “Assimilation is a crime against humanity.”

The invitation to politicians and religious leaders of Turkish descent included lunch in a five-star hotel in Istanbul and offered to cover their travel costs.

The title of the meeting was: “Wherever one of our countrymen is, we are there too.”

About 1,500 Turks from several European countries attended, including a Belgian MP and representatives of companies and NGOs.

The meeting was organised by Erdogan’s reigning Justice and Development Party (AKP), which has conservative-religious leanings and has been criticised for pulling the country away from its secular tradition.

Faruk Celik, a minister in Erdogan’s cabinet, described German politicians as “my honourable parliamentarians” and described Erdogan as “our Prime Minister.”

German politicians and religious representatives of Turkish descent were shocked by the brazen political lobbying and were sharply critical of Ankara.

“If opponents of (Turkey’s) EU entry from the (European) Union had been there, they would have got a whole lot of material for their argument,” Toprak said.

Canan Bayram, a Turkish-born Greens member of the Berlin city parliament, said she had travelled to the conference as the integration spokeswoman for her party but had insisted on paying for herself.

“It was important for me to make clear that as a German MP I was not financed by the Turkish government,” she said.

Former Social Democrats member of the European parliament and businessman Vural Öger said: “The Turkish government should worry about the interests of Turks in Turkey rather than trying to use Germans of Turkish descent as their messengers.”