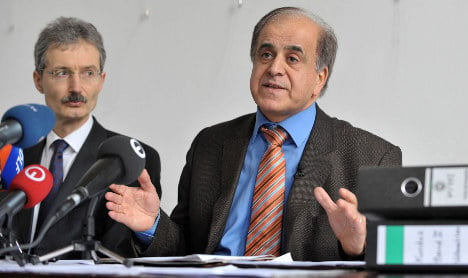 Docke (left) and Popal (right) at a press conference in January. Photo: DPA

Bremen lawyers Karim Popal and Bernhard Docke have not only asked for the millions in compensation for the victims, but also for some €180,000 in legal fees and another €25,000 for their travel expenses in the case, news magazine Der Spiegel reported on Monday.

Ministry insiders told the magazine that the sums have “left the realm of seriousness,” and there is talk of conducting a relief project instead.

Some 142 people were killed in the controversial September 4, 2009 air strike ordered by German Col. Georg Klein. The bombardment in the northern Afghanistan region of Kunduz was meant to destroy two fuel tankers that had been hijacked from NATO forces by the Taliban. But many of the dead turned out to be civilians, and the incident, which led to an alleged cover-up within in the Defence Ministry, is currently under review by a parliamentary inquiry.

According to Der Spiegel, Popal, who was born in Afghanistan but practices law in Germany, sought out information on the case through an aid organisation and started representing victims in the case.

Popal and Docke have said that the €7 million would be used for aid projects spanning several years, but the ministry reportedly already put €150,000 towards winter aid following the bombing and has only expressed an interest in compensation that is “customary” to Afghanistan.

Docke refused to comment on the case directly, but told the magazine that the lawyers’ demands were proportionate to the harm caused and are “nothing sensational.”

And while one German paper named Popal the “angel of the victims” after he travelled to Afghanistan to help following the bombing, Der Spiegel reported that several experts in the field of military victims’ compensation in Berlin and Frankfurt have since cut ties with the lawyer because of dubious business practices.