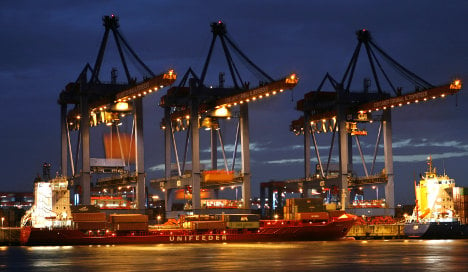 “(Could) those with surpluses do a little something? It takes two to tango,” she told the Financial Times newspaper. “Clearly Germany has done an awfully good job in the last 10 years or so, improving competitiveness, putting very high pressure on its labour costs.”

Though Germany recently lost its crown as the world’s leading export nation to China, Europe’s largest economy still has a positive trade balance with most of its immediate neighbours. And eurozone members can no longer devalue their currencies to compensate for Germany’s surplus as they frequently did before the introduction of the euro.

“I’m not sure it is a sustainable model for the long term and for the whole of the group,” she said. “Clearly we need better convergence.”

But Chancellor Angela Merkel’s spokesman on Monday refuted Germany was the problem.

“We are not a country that sets salaries or consumption by decree,” he said. “It is better to think about a growth strategy together rather than obliging some to hold back artificially.”

He underscored the role of Germany’s Mittlestand sector, a vast network

of small- and medium-sized enterprizes, often family owned, that are highly specialised, export oriented and “very innovative and very quick to react.”

“The question is how can others achieve that,” the spokesman said.

Without a federal minimum wage, the German government cannot directly increase disposable income and in the 1990s the country’s trade unions accepted relatively low pay to preserve jobs as aeging German industries restructured operations to keep abreast of others around the world.

Less money to spend, along with high taxes levied to help develop formerly communist eastern Germany and a German tendency towards saving, resulted in an economy that imports much less than it exports.

“It is the relative weakness in imports (and consumption) that has led to the sharp widening of the current account surplus,” Goldman Sachs economist Dirk Schumacher noted, a trend that is not likely to change soon.

Some economists urge the government to cut taxes to encourage consumption, but the government has to deal with a swollen public deficit resulting from stimulus programmes aimed at dragging Germany out of its worst post-war recession.