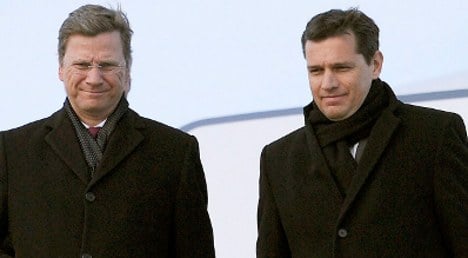 Having members of minority groups in positions of leadership in Germany is still neither commonplace nor totally accepted. There were plenty of female politicians before Angela Merkel, yet many found the idea of a woman chancellor unimaginable – including members of her own conservative Christian Democrats.

The fact that her husband had to play the role of ‘First Lady’ was equally unusual, which is surely one of the reasons why he is frequently unwilling to make public appearances on Merkel’s official travels.

They refer to each other in this distanced way in order to conceal – and protect – their private relationship. This formal distance repudiates its exceptional nature. The public knows that Mronz and Westerwelle are a couple. But can we measure a partnership which is consciously and subconsciously discriminated against by the same yardstick as we would measure a “normal” couple?

The answer is unambiguous. We have to, especially in a case of a government official. Holding a public office demands a strict division between private and public interests, and that holds for men, women, homosexuals and heterosexuals. But Westerwelle has simply chosen to reject accusations of a conflict of interest.

He refuses to give concrete answers to concrete allegations, but instead hides behind previous foreign ministers who also “more or less used” the opportunities to take their spouses with them overseas. Apparently Mronz accompanied Westerwelle in his personal capacity as his partner – but why did he then pay his own travel costs?

This information only came to light after many days of public debate – just like the illuminating fact that Mronz was on the trip to pursue his own interests. Westerwelle’s companion is travelling on business – for a good cause perhaps, but certainly not in the name of the Federal Republic of Germany.

As a board member of the charity Ein Herz für Kinder (A Heart for Children), Mronz wants to use state visits as an opportunity to work for the needs of children. He announced this in an interview in the tabloid Bild, a newspaper that serves as the charity’s mouthpiece, giving both parties an excellent opportunity to promote their respective philanthropic efforts. But there are also unanswered questions about whether he used the trips as platform for his role as a sporting events promoter.

As leader of the pro-business Free Democratic Party, Guido Westerwelle likes to create a stir – his motto these days seems to be “cheekiness wins!” The recent furore about his welfare comments showed that he knows how easy it is to stand there like a brave warrior, claiming to be walled in by taboos where none exist. Yet now, as foreign minister and vice chancellor, the great taboo-breaker is fending off accusations of colliding interests by playing the political correctness card – and not just once, but twice.

A gay couple concerned for the plight of disadvantaged children? Isn’t that an almost irresistible call for public opinion to be PC? No, it isn’t. It’s an old leadership trick used by those who have been shut out in the past. Things getting uncomfortable up at the top? Gently remind everyone of old discrimination.

But Westerwelle is Germany’s vice chancellor. And he must explain himself.