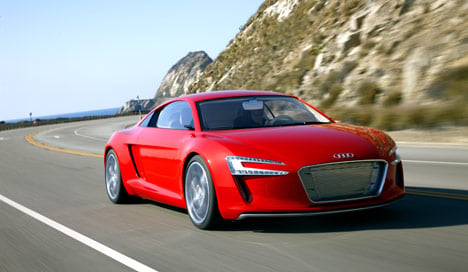 Audi’s operating profit of €1.6 billion ($2.2 billion) was nearly three times that of VW’s eponymous brand, which posted a profit of €561 million. VW’s finance unit was the second biggest contributor to operating profit, turning in €606 million.

In terms of unit sales, Audi sold just under 950,000 vehicles, less than one quarter the 3.954 million VW’s delivered last year.

“Without Audi, VW would not be profitable,” German car expert Ferdinand Dudenhöffer from the University of Duisburg told news agency AFP. The Volkswagen group “does not pay enough attention to costs,” he added.

VW, Europe’s biggest carmaker, aims to overtake Toyota as the world number one by 2018, and sell more than 10 million vehicles per year at that point. To reach its goal, VW is ramping up local production in Brazil, India and the United States, countries where chairman Martin Winterkorn said the group was “under represented.”

VW is also developing a common “modular” system that would account for two thirds of new autos, with accessories and other elements added to differentiate brands and models, he said.

Winterkorn told an annual press conference that “2010 will not be an easy year,” however.

“The German and European markets will decline markedly,” he said, while increases were forecast in Brazil, China – now VW’s biggest single market – and the United States.

“Our goal is to do better than the competition” this year, the VW chairman said, though he did not provide a precise target.

In 2009, VW sold 6.29 million vehicles, and made a net profit of €960 million, a drop of almost 80 percent, on €105.2 billion in sales. On the financial front, the group said it was sticking to plans for a rights issue in the first half of 2010, and looked to raise around €4 billion. The funds would help maintain VW’s credit rating as it integrates its latest acquisition, the luxury sports car maker Porsche.

VW, which has also bought a 20 percent stake in Suzuki of Japan, has become too big, Dudenhöffer said, with brands like Seat, Skoda and VW “devouring each other.” Seat posted an operating loss of €339 million last year.

VW supervisory board president Ferdinand Piëch, the man behind the scenes, believes competition between the group’s brands is healthy however because it forces all to search constantly for ways to improve their operations.