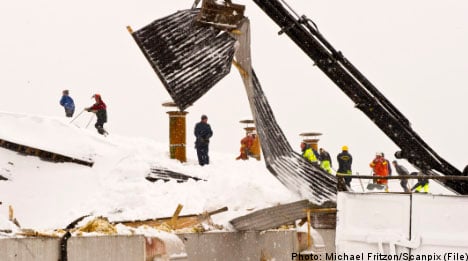 The minister pledged the imminent introduction of amendments to Sweden’s construction and planning laws following a meeting on Thursday with a range of government agencies.

Snow levels recorded this winter in no way exceeded the projections that form the basis for accepted construction norms, said Carlgren.

“It’s not acceptable that the roofs have collapsed on buildings that are supposed to be able to house the general public,” he said, following a winter that has seen roofs cave in on everything from vast supermarkets to a range of sports halls.

The SP Technical Research Institute of Sweden, a company wholly owned by the Swedish state, assured the minister that snow was not the real villain of the piece. Instead, the extreme weather conditions have exposed major shortcomings in construction and maintenance procedures across the country.

“Constructions are hard to judge; very rigorous checks are necessary,” said SP divisional manager Carl-Johan Johansson, who added that roofs tend to collapse with great alacrity once the chain of events has been set in motion.

Mats Björs, head of trader organisation the Swedish Construction Clients Forum (Byggherrarna), said he would welcome any legislative changes, though he also believed the majority of contractors took proper responsibility for checking up on their work.

“But there are probably lots of contractors who don’t even know they have this responsibility, so it could be good to turn on the pressure,” he said.