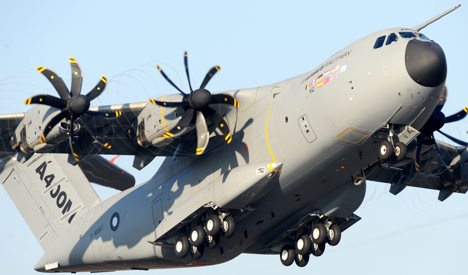 The deal secured 10,000 jobs and the future of Airbus and the A400M project, and will cost the taxpayers from the seven countries a total of €3.5 billion. The governments and the EADS/Airbus aerospace company have agreed to share the cost overruns that have dogged the four-engined military plane.

The German Luftwaffe is now set to take delivery of its first plane in 2014, five years later than originally planned. The Airbus is intended replace old C-160 Transall planes, particularly in Afghanistan.

In 2003, Airbus agreed to construct 180 A400Ms for a fixed price of €20 billion, with the first planes to be delivered in 2009. Germany ordered sixty of the planes, and France fifty. But political blunders and technical delays hampered production, and the maiden test flight did not take place until last December in Seville, Spain.

Friday’s deal came about after Airbus threatened to pull the plug unless the seven – Germany, France, Spain, Britain, Belgium, Luxembourg and Turkey – stump up more cash, warning that the fate of the European aerospace giant depended on the project.

Along with the €2.4 billion the countries has already written off on the project, the problematic development of the plane will have cost Europe’s major aerospace nations €4.2 billion. Despite the long-awaited bailout, EADS is set to post a net loss for 2009, although detailed figures will not released until March 9.

“EADS considers that this agreement provides a sound basis for a successful evolution of the A400M program,” the company said in a statement. “EADS will strive to identify opportunities to significantly reduce risks in the A400M program and to deliver a state-of-the-art product within the new frame of the contract.”